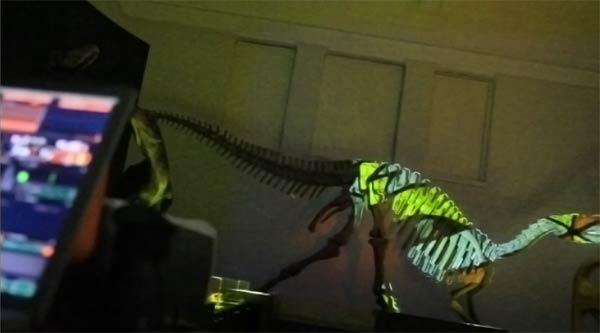 After being invited to perform at the Australian Natural History Museum in Sydney ( back in Aug 2011), I couldn’t resist the chance to project onto a dinosaur skeleton. I was performing video in the foyer with Pattern Machine as part of the Museum’s Jurassic Lounge evening series, and the museum staff were super helpful in squeezing in this extra request during an already hectic night ( which amongst other things, included a silent disco and live taxidermy!).

The Muttaburrasaurus was apparently a herbivorous Aussie dinosaur that lived 100 million years ago, around 8m / 26 ft tall and weighing around 3 tonnes. To project onto it, I connected my camera to my laptop and used Madmapper‘s spatial scanner function to generate an image mask, tidied this up in photoshop, then played with the masked image using VDMX.

Thanks to Barry Saunders for the invite, and Chanele Moss for general museum awesomeness.