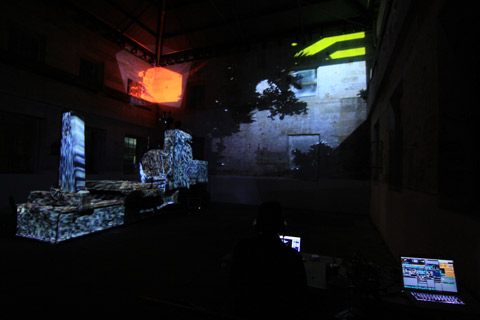 Video it would seem, is slipping from the screen into the world around it. Increasingly we expect to see pixels sliding around us in three dimensional space – dripping down heritage building facades, climbing across weird geometric clusters surrounding a sound system, illuminating the edges of random urban infrastructure. Although we’ve long held the ability to use software for custom tailoring projections to suit specific shapes, Madmapper seems to have struck a chord because it arguably makes the process easier and more intuitive than anything else before it. (Above image: Madmapper makes easy work of industrial machinery at Cockatoo Island, during preparations for the Underbelly festival. More images. )

Vat Ist?
At its simplest – Madmapper is software for mapping textures to surfaces. This approach presumes the textures have been created elsewhere, or are being created elsewhere in real-time and piped into Madmapper. This avoids unnecessarily cluttering or slowing down the application, and allows Madmapper to focus purely on techniques for aligning textures onto surfaces. It’s a recipe which seems to serve it well, although means the application can at times seem undercooked when looking around for functions you’d expect in video software, that they’ve decided are best dealt with elsewhere. Below, the madmap used for the triple projector image up top. 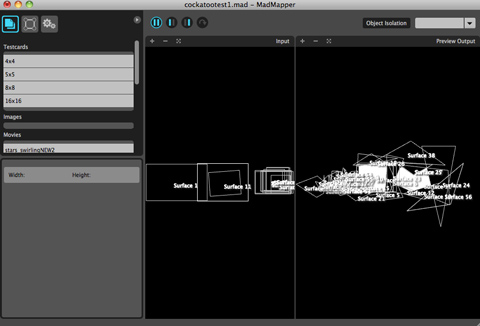 The Basic Ingredients
That purity of focus is immediately evident in the spartan split-screen interface. In the left hand column, we get the ability to choose our source material textures ( real-time video from other software via Syphon, or images and movies drag and dropped into the column ). On the right side we can see what our textures look like, the shape of the surfaces they are going onto, or textures and surface side by side. Within that, there’s a careful attention to detail which makes the mapping process as seamless and non-complicated as possible. Below, zooming into the interface, first the triple screen map, then a closer view of the map for the industrial machine. 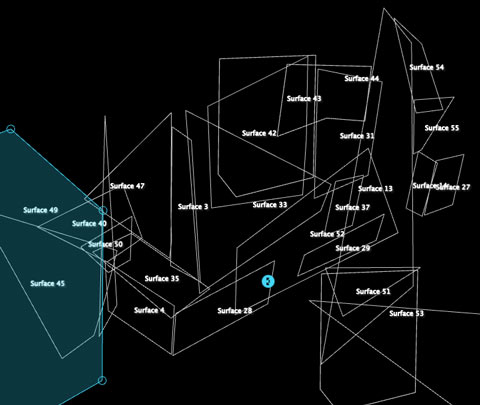 Interfacing
There’s a lovely level of refinement to the Madmapper interface – it’s simple, but it works as you’d expect, and sometimes better. For example, click-dragging the corner of each surface to skew it in a direction isn’t too remarkable, but by pressing the left, right, up and down arrows on a keyboard, that corner is nudged in tiny increments – perfect for tiny alignment adjustments. No weird menu bottlenecks, it’s just there in front of you. Click on the surface inside the corners and the arrows move the whole surface pixel by pixel, and for the surface’s very handy scale and rotation buttons, the arrows again provide incremental help. 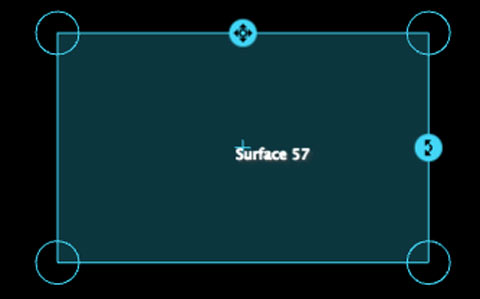 Bonus Features?
Plug in a camera and use Spatial Scanner to turn your video-projector into a 2d scanner.
Grid warping ( similar to mesh warping in After Effects )
Ability to use existing photographs as a preview background, to test out a mapping design.
Ability to export your image as a PDF.

What’s Missing?
Sitting in a dusty warehouse with a projector pointed from a weird angle, projecting onto a weird industrial shape – is a fairly good test of it’s versatility, and once you get wrestling with very specific problems, it becomes evident how well thought through their interface and features are. On the other hand, this almost elegant sophistication makes it all the more jarring when some things are missing – Madmapper can feel a little too minimal at times – especially given its price.

Wishlist?
– an ability to create bezier curves
– ability to create lines or circles ( it only includes capacity to create triangles, squares and polygons )
– no ability to set shortcuts for keys / midi to trigger features, fade to black etc.
– no ability to switch between presets.
– can only receive one Syphon source ( it’s possible to provide multiple sources by making a collage in other software, but it seems like work that could be avoided )
– being able to control aspects of surfaces such as colour or outlines. Madmapper prefer that to be done elsewhere, but this would very conveniently streamline some aspects of mapping onto shapes.

(To their credit, some of these features are listed in their help forums for inclusion within future upgrades. )

Performance?
Given that the surface transformation ninja moves are likely happening on the graphics card, Madmapper seems to add hardly any major dent when running on top of VJ software. Haven’t seen a single crash yet and all of the interface seems really responsive.

Requirements?
An Intel Mac running Mac OS X Snow Leopard 10.6.
To use the Spatial Scanner function of MadMapper, you’ll need either a QuickTime compatible Firewire camera
or Canon camera models that are compatible with the Canon EDSDK.
MadMapper v1.0 license for 2 computers €299
MadMapper v1.0 license for 2 computers for of owners of an existing Modul8 2.6 license €199
Educational pricing is also available.

Support?
Aside from their forums, Madmapper have cleverly published a series of very thorough tutorials that stretch from the basics through to integrating with a variety of VJ software, and detailing some quite sophisticated processes. In particular, a shout-out is needed to this post that deserves a parallel life on an avant garde architecture blog: Turn A Building Into A Giant Equalizer. See also: Using After Effects to prepare a map for a detailed building.

Overall?
There are other free and paid software choices for projection mapping, but the elegant focus of Madmapper minimises the amount of time spent bogged down in complicated processes. It’s expensive software, but by removing some of the technical barriers, it opens up projection mapping to ever more complicated futures. Super-like.