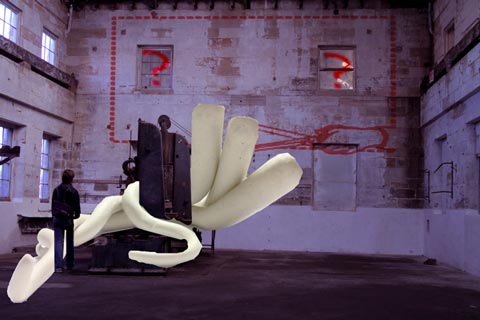 Now that I’ve finished marking all of the respective assignments from classes at RMIT and Swinburne, am looking forward to biting properly into a few long neglected creative projects / overloaded bookshelves / learning curves etc. And that overdue skynoise overhaul so it better reflects the 2011 web and myself. Next up though, a video island adventure in Sydney harbour.

As part of the 2011 Underbelly Arts festival, I will be creating video projections to accompany long time audio wizard collaborator Dan MacKinlay, James ‘Dubtable’ Nichols ( that’s him in the photo), and Sarah Harvie whose specialty is inflatable sculptures! We’ll be doing this as ‘Pattern Machine’ in the space photographed above, which is one of the ancient ship building rooms at Cockatoo Island in Sydney Harbour. Pattern Machine has a tumblr and a twitter account, where we’ll be documenting our preparations and experiments, and also has a festival page, alongside all the other festival artists.

This year’s festival was pitched as an island residency for developing some works in progress. Looks like it’ll be quite an interesting collection of projects, with many artists practicing / building / tinkering on site in public view, followed by a performance  and exhibition day on July 16th, showcasing what has been explored during the residency.

For our part, the work in progress will mean explorations into location sampling and weird algorithimic audio with Super-Collider (eg “New No New Age Advanced Ambient Markov Music Machine” and attempts to intertwine inflatable tendrils around the machine relic within our inherited room. Pixel-wise – I’m hoping to do some projection mapping experiments onto that machine relic, re-animating it as it were, in real-time response to the sounds happening, and similarly try to create some kind of responsive visual designs on the inflatable structures. Aside from that, I’ll also be testing out a triple screen external graphics card ( matrox triple head 2 go ) to experiment with simultaneously projecting various scenes onto the wall behind the machine and inflatable sculpture. For the scenes projected on the wall, will be playing with some simple responsive graphics and some filmed / composed sequences of various events / stop motion / locations from around the island. My tools of choice : VDMX + Quartz Composer, with Madmapper for the projection mapping (Madmapper review coming soon).

Below, James and The Machine, moustache not to scale: 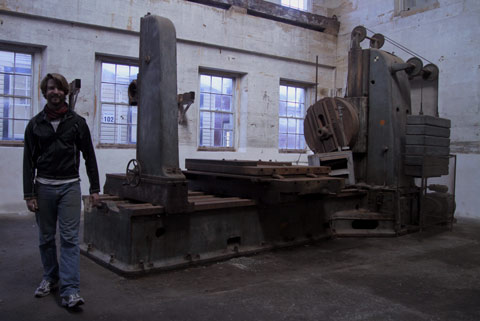