Music video made for the Cumbia Cosmonauts Mexico Remixes EP, based on footage shot during our tour of Mexico in Dec 2014. (Shout outs to all the fine people we met in Guadalajara, Monterrey, Metepec, Tijuana, Mexico City and Oaxaca!) The video and EP launched … Continue reading → 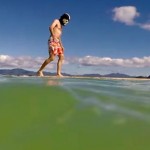 I was lucky enough recently to catch a film-talk panel between director Joshua Oppenheimer and John Safran, at the Melbourne International Film festival. Having just seen the Look of Silence earlier that day, and already in awe of the brave and audacious film-making … Continue reading →