Above, Pattern Machine, the fruits of a recent fourway collaboration in a weeklong residency on Cockatoo Island ( a former prison and shipbuilding yard in Sydney Harbour), during the 2011 Underbelly Arts Festival. 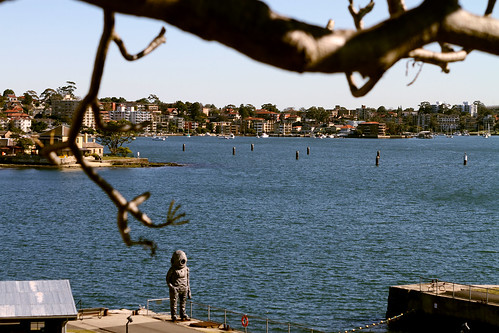 By the end of the week, after much tech configuration, island sampling*, and software wrestling, we’d concocted a work in progress that was deemed seaworthy enough for 3 x 45 minute audiovisual sets during the public exhibition night. And during that day the space was filled with people wandering around the inflatable sculpture, while cocooned by a generative surround installation busy mutating captured island sounds into new species. Turns out the accumulated ferry rides, nautical rust and winter winds were worth enduring in the end, as the performance seemed to go really well, much of the pieces falling into shape on the very last evening before the event.

For myself, it was very satisfying to have an opportunity to explore video composition in a great setting, and in a more spatial way – using an external graphics card to send a different signal to 3 different projectors simultaneously, using madmapper to position and map the video from each of these, and having the luxury of returning each day to experiment with equipment that was already set-up. And it was super-satisfying to be doing that with…

Aside from the audacious setting, part of what made the residency great was the motley collection of artists also spending time on the island, each struggling with their own peculiar set of problems to solve. And it was inspiring to see everyone’s work evolving over the week. This extensive  festival review gives a good taste of how the exhibition day unfolded, and these were some of my favourites:

Case Study – This was my pick of the bunch, 6 artists who had the aim of building a new colonial society in their allocated portion of the island. Which they built out of everything they brought in their suitcases, as well as using their suitcases themselves to build individual artist houses. There were telescopes and projected moons, ornate water features, mossy forests growing from open suitcases and test tubes, every step a new photogenic overload.

Younes Bachir and Strings Attached got the jaw-drop-spectacle medal – with their meat-suits, paint-splashy aerial choreography ( imagine a dozen people 4 storeys up dynamically moving about in space ) and flair in abundance. ( This gives a good taste of why it excited.. )

Brad Miller’s Data_shadow video installation was super-slick, an exploration of memory, technology and how lusciously you can make a database of photographs and video wander across 4 screens with motion detection cues from visitors. Biljana Jancic‘s wooden boxed shafts of light played beautifully with the smoke machines, silhouettes and the industrial space and  SWANBRERO used inflatable car sales dancers to great effect in their piece – INFLATE MY HEART WITH 1000 GUSHES OF WIND .