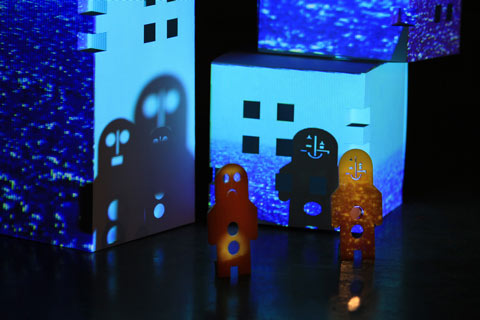 Have been doing some experiments recently with Troy Innocent, involving laser cut characters, everyday scenes and projection mapped video. We’re trying to figure out what works well for us, with an eye to fleshing out something some kind of developed work later. Troy has access to a laser cutter at work, and obviously the attraction there is to play with the unique levels of intricacy that a laser cutter allows with materials such as plastic and thin plywood. Taking that a step further, we thought it’d be fun to develop some simple low frame animation loops with these physical characters and record them moving about in stop motion. We’ve done some simple tests outdoors which worked well, surprisingly popping to life when played in sequence onscreen, and most recently we tried an indoor shoot, which gave another chance to test out Madmapper.

First up, the whole routing video clips between video applications thing, enabled by Syphon, is really fantastic. For me, this means VDMX to Syphon to Madmapper to the projector. Manipulate video in your preferred real-time software, then at the end of the chain remap this video onto what Madmapper calls ‘surfaces’, creating, positioning and reshaping as many of these surfaces as you like. This makes sense and so far the addition of running Syphon + Madmapper alongside VDMX hasn’t seemed to dent the performance of VDMX at all. That might change with more complicated projection mapping – we’ll see. 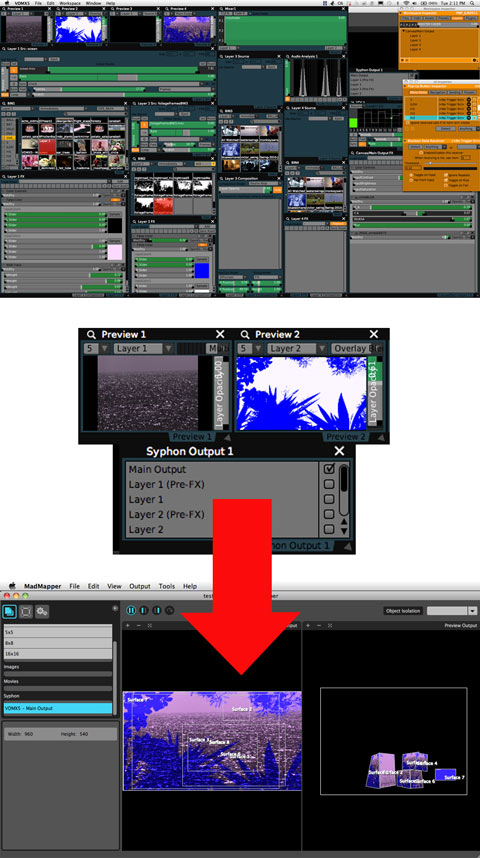 As seen above, the Madmapper interface is minimal and intuitive, and this helps mapping happen super quickly. For our test mapping onto some paper skyscrapers, it was a simple process of selecting which part of the video to be sent to a surface, then clickdragging the corners of the virtual surface until it the video filled the actual surface of the paper skyscraper in front of the projector. Total time to line-up video on the sides of 3 buildings? About 5 minutes. This is a very simple example, and possible with other existing software – but this software certainly makes the process a breeze. Am going to post a full review of Madmapper soon, and discuss some of it’s strengths and weaknesses for dealing with more complex scenarios. In the meantime, it’s worth noting that although it’s pitched as a solution for reconfiguring 2D imagery onto 3D shapes – Madmapper’s ease of use also makes it a very attractive option for just even compositing imagery within 2D environments. From the close-up below it should be evident how straight forward it is to select portions of video, and quickly composite this into desired shapes.  More laters! 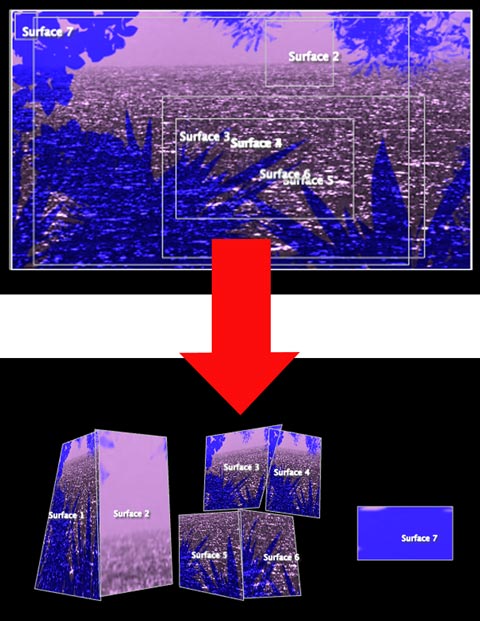