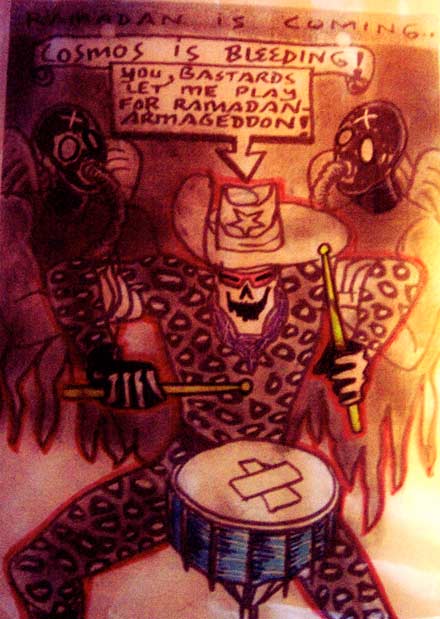 Ramadan has started in Istanbul, a significant month for Muslims, where amongst various practices, they fast during daylight hours ( have been told to avoid taxi drivers near the end of the day during this month ). It was for Ramadan that the traditional Oktoberfest beer festival was held earlier than usual – in Israeli-occupied West Bank, in the Palestinian Christian village of Taybeh, where a microbrewery recently shifted dates out of respect for muslims . Now you know, thanks BBC.

At 4am a few nights ago, was introduced to another Ramadan practice – via what seemed like raucously drunk drummers pounding out harsh, brutal beats on oil barrels. Found out a few days later, this is a nightly ‘service’ during Ramadan, to wake Muslims before dawn for eating and performing their fajr prayer. And at the end of the month, the drummers will be coming around for payment for this ‘service’.

Which made the above drawing make a bit more sense. Piece is by Art Diktator, an Istanbul artist who plays in
Neoplast, a Turkish goth band. Apparently they do a nice ‘Black Wedding’ cover of Billy Idol’s ‘White wedding’. Text reads : “Ramadan is Cuming. Cosmos is Bleeding. You Bastards. Let me play for Ramadan Armageddon.”

Saw the drawing amongst a range of Art Diktator fusions of sex, violence, death and anti-tourism at The Triangle Project an Istanbul Biennale related project that brought 30 or so Danish artists from Copenhaegen to exhibit, perform and collaborate with Turkish artists. Adding to the cultural mix, most of the events were held in “The Hall‘, a cultural centre that has been converted from an Armenian church ( have only discovered since arriving in Istanbul, the intense historical problems between Turkey and Armenia. ) Shout outs to Mikkel Mayer (introverted folktronica wth great sounds), Kidkishore & VJ Cancer ( aka the albertslundterrorkorps – ‘Danish bhangra gabba mash-up ghettotech’ anyone?) and Band Ane, a 21 year old female singer/laptopper/dancer/prodigy who swings from to glittery idm pop, to ravish jungle by the end of her set.