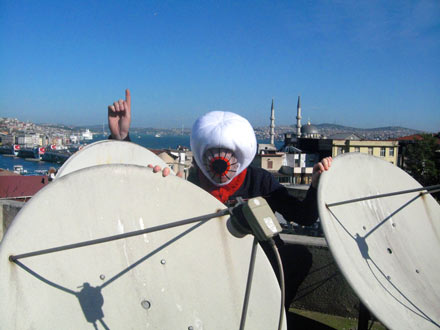 Aye, will be doing a ‘live cinema performance’ at the Meredith Music Festival’s outdoor cinema, Dec 12-14, 2008. It’ll have an intergalactic theme of sorts, which I thought the photo above suited nicely. ( It was taken from a carpark rooftop in the spice markets of Eminonu during my stay in Istanbul last year). Below, the blurb sent to the festival :

“Load up on supplies, lie back on the grass, and let cinema become your spaceship windscreen for an intergalactic journey to distant stars ( and back – we don’t want you to miss the next act ). Underappreciated Flying Objects along the way, may include, bootlegged Super Heros (badly green screened by filmmakers in Mexico, the Philippines, Italy, and Turkey ( of course! )), Will Oldham high on a trampoline, a Mike Munro paper mache mask ( as used in Jon Safran’s banned Australian TV pilots ), a 21st century German cannibal, Lucky People Centre, musical prostitutes, animated turntables, fighting gorillas, and a Soviet Union cosmonaut who returns to earth to discover the U.S.S.R. has been dismantled. In-flight zentertainment for the 90 minute journey will include video karaoke, animated interludes and a condensed history of musical cinema. BYO anti-gravity boots.”

Will be testing out some of the samples and edits this Friday @ The Johnston St warehouse party in Fitzroy. Should be fun.