Aside from it’s wii-like accelerametor ( movement gestures as data for controlling software ), the iPhone’s touchscreen interface and hard-drive with internal operating system, makes it a potentially awesome device for manipulating software. Say hello then, to the i3L MIDI BRIDGE for the iPhone by artificialeyes.tv, software developed to work with their upcoming 3D software 3L (‘thrill’). Software that translates the sliding and pressing on the touchscreen into midi information, which is sent wirelessly to a small piece of software on the desktop, which in turn can be routed to the software application of your choice. In my case below, this was VDMX. Is it fun to use? Hell yeah!

Though they developed it to work on their upcoming app, full credit to artificialeyes.tv for releasing it as freeware to work with any software. More details and download over at artificialeyes.tv. 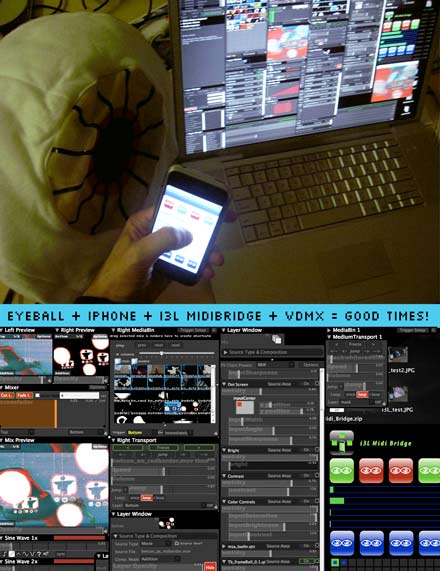