True story : I gave a skateboarding lecture @ Istanbul’s Bilgi University, to an Architecture class two days ago. Was attending an ‘Art Experience‘ workshop ( part of the Istanbul Biennale), and one of the participants introduced herself as an Architecture student. Mentioned I’d studied architecture for a year before, and asked what she was working on. A skatepark! Expressed keen interest to see any drawings she had, but didn’t expect her reply – “well if you skate, it would be very helpful if you could talk to our class… in half an hour”. Which turned out to be 30 students and two lecturers, eager to hear my perspective ( an actual skater! ), about their project. And so, with my internal laugh track set to 11, I talked about what makes a successful skatepark – the location and social space being as important as the materials and geometry, clicked through a variety of online skate videos, and answered a range of questions that made skaters sound like they were from another planet. Watched one of the presentations by a group before I had to leave, which was a conceptually interesting modular and reconfigurable, but unskateable skatepark – exclusively featuring 8foot pipes ( a diameter too small to allow any real skating ). Made my contributions to their skatepark’s evolution, and departed grinning.

The ‘lecture’ also got me digging up this old interview with a UK Architecture Professor who had written a book about Skateboarding and Architecture. ( Prior to skynoise.net, published a few hundred posts at octapod.org/jeanpoole – a server which was abandoned at some point, and I’ve long been meaning to extract the archives of stories / interviews / posts etc using the waybackmachine More to come… ). 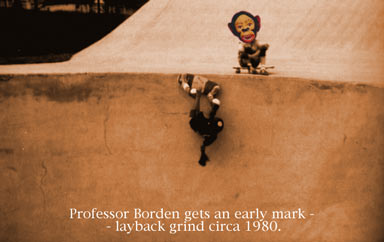 As Arnold ( both the terminator & the Different Strokes character ) are no doubt testifying in the Californian elections, there is a better world possible. One of win-win situations rather than ‘us and them’ or ‘axis of evil’. Across the Atlantic and doing his bit to unite jarring camps, is Iain Borden, Professor of architecture at the University College of London. Iain has authored a remarkable book that should help smooth architect-skater peacetalks: ‘Skateboarding, Space & The City : Architecture and the Body’.

The book has appeal for both (sub)cultural theorists and those who like to ollie, and unfolds an engaging history of public versus private space and skateboarding as a subculture and filter of urban experience. And you’ve gotta love photo captions like : “Exploiting the rhythms of modernist urban space and architecture. Phil Chapman, ollie between planters.. “. R-e-s–p-e-c-t ~! How often do we get a skating professor round here?

How do you describe your research/book at parties?
People use cities in ways different to how architects and planners intended them to be used, and as a skater I wanted to say something about the history of that activity.

Sk8ing & theory make unusual bedfellows – how were the seeds sown for your book?
In the late 80s I was a PhD student at UCLA, and asked to write an essay on something about LA that I knew about, but no one else in the class knew. I was also taking studying Henri Lefebvre, so writing about skateboarding and spatial theory grew from that moment. I’ve generally been interested in the history of architecture from the point of view of the user  i.e. Those who experience and utilised space and buildings, rather than those who design and make it.

If writing about music, is like dancing about architecture, then what does that make you?
Er, confused in mind and body.

How has skateboarding shaped your appreciation of architecture?
Skateboarding lets you experience buildings not as a set of objects, designed by architects, but as a set of spatial experiences. By this I mean that moving around on a skateboard makes you consider buildings and landscapes as a set of opportunities to skate, you are constantly sizing up banks, ledges, curves, curbs and so on for their ability to be skated upon. So there is this initial process of interrogation, looking at architecture differently, working out whether it can be skated or not. And then there is the actual engagement with the architecture, using the skateboard and your body in relation to the physicality of the building, and here one appreciates architecture differently again, this time as a direct sensual engagement, less to do with the mind and more to do the living body that we all possess.

How does sk8boarding critique architecture & capitalism?
Skateboarding is a critique of the Protestant work ethic, the idea that we should always be working to produce something: a product or a service to sell. Skateboarders (non-pros), at least while skateboarding, don’t generally do this, and so skateboarding suggests we can produce different things: expend energy not as work, but as the production of emotions, actions, effort and play. Skateboarding is also a partial critique of commodity consumption, i.e. when not working we should be consuming things. Again, skateboarders use urban space and buildings without buying anything, treating the city as a free wealth for all to enjoy.

Can u describe ‘rhythmanalysis’ simply, and how skating fits into this?
Rhythmanalysis is the term used by Henri Lefebvre to describe space associated with actions of the body, the space produced by walking, or by moving, or by breathing, or by the cycles of reproduction and regeneration. Space as lived over time, by people with physical bodies. For skateboarding this might mean such things as the speedy space of moving over the pavement, or the rhythmic space of a skater on a half-pipe, or the weekly or seasonal patterns by which skaters return to particular spaces over the course of days, weeks or even years.

How has your research affected the way you skate?
If anything, I guess it has made me want to enjoy my skating as a bodily experience and as a kind of play and fun for me, that means enjoying simple things like carves and grinds rather than worrying about new tricks, and feeling the concrete move underneath me. I tend to be more of an old school skater than a streetskater . . .

3 things architects could learn from skaters?
Take risks. Learn from others. But do it your own way.

What interesting responses have u had from architects or theorists?
Lots of surprise that this was even a subject worth thinking about it . . . but then a lot of interest in the way other people can use and enjoy architecture in ways the architects never even dreamt of.

Do you know any architects who design with skaters in mind?
Not really, most architects don’t really get to design major buildings until they are at least in their 40s, and often into their 50s or older. So given that there are now a load of 40-something architects who used to skate in the 1970s, I reckon we are probably due some serious skate-friendly buildings over the next decade or so.

Favourite skateboard trick names?
Invert, layback, frontside – I like the ones that refer to the position of the skater’s body.

Can u recall any good skate-dreams?
Hmm, skateboarding tends to appear in my dreams as a representation of anxiety, where I have forgotten how to ride a pool, or some such frustration. Not sure if this good or bad, but at least I do dream about it. . . .

What would you prefer to ollie – the skull of einstein, a cloned sheep or a gaff-taped Tony Blair?
Definitely a gaff-taped TB – time to make the bugger realise that we don’t all want to be Christian, well-behaved model citizens all of the time.

‘Skateboarding, Space & The City : Architecture and the Body’ by Iain Borden is out now through Berg.