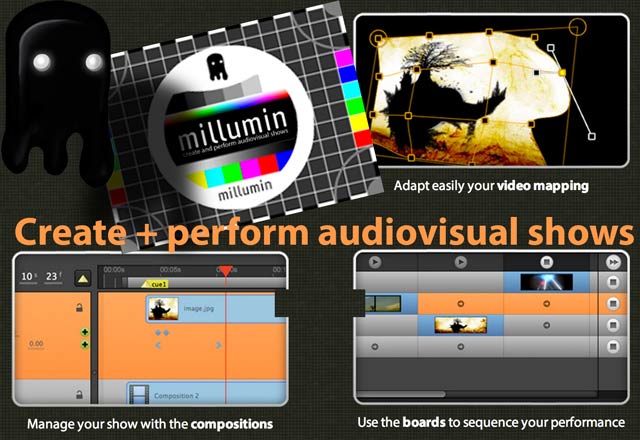 As real-time video software continues to evolve, we’re starting to see some really thoughtfully considered applications – such as Millumin, by Philippe Charaund, software dedicated to “create and perform audiovisual shows”. In part, Millumin is possible because of today’s easy re-routing of video between applications (thanks to software such as Syphon on mac and Spout on PC), which has enabled some developers to focus on specialty areas, and allowed others to provide ways of usefully integrating different parts of a video workflow.

Where does Millumin fit in?

While there are a lot of real-time video tools and specialities available, Millumin’s great strength is as over-arching software – and providing useful ways for co-ordinating and controlling other software ( eg triggering and manipulating clips inside VJ software, and recompositing, mapping and sequencing that video with Millumin, easily jumping between very complex compositions).

Millumin will especially be of interest to those seeking to sync media in tightly curated shows eg syncing video with important theatrical cues, conference cues, or a specific sequence of events in a music show. Aside from the time-based controls, it’s also a pretty effective piece of mapping software – which includes a built in capacity to edge blend between projectors.

In other words, Millumin provides good control over time (sequencing) and space ( compositing and mapping). It’s a unique recipe – while there are other apps that offer more advanced portions of what Millumin does – eg Vezer‘s sequencing and timeline options, or Madmapper‘s mapping controls – there’s nothing else that quite manages to do what Millumin does.  QLab is probably it’s closest competitor, with the strengths and weaknesses of each meaning one or the other will suit your workflow better.

From their site guide:
1. Drag-and-drop ﬁles from Finder to the Dashboard, and click on the cells to play them
2. Use the Workspace toolbar to move, map, warp, mask … to rotate and scale the layers directly in the workspace.
3. Change blend mode, add effects, transitions and more from the Properties Panel
4. In the Library, manage your ﬁles, Syphon servers and inputs
5. Create a Composition, then organize your media in time with keyframes
– includes ability to play compositions within compositions ( like nested compositions in After Effects)
– Also like AE – includes adjustible keyframes – change opacity, position, scale or rotation change over time to specific values.
– cue points can be added.
– pause on cue points
6. Import this Composition into the Dashboard + switch between complex compositions easily.
7. The Magic Key is [SHIFT] : maintain it to multi-select and snap items

Control of time / sequencing: Millumin’s key-framable timelines will be warmly familiar to everyone who has used video editing software, and tends to find such functions missing within VJ software. Most VJ software will show a timeline / playhead for each clip – but much more rare is a capacity to place many clips along a timeline, and easily add cue points, and easy linear arrangements. Example nice touch? Drag and drop a clip onto a timeline, then drag the end of it to auto-loop as long as you need. 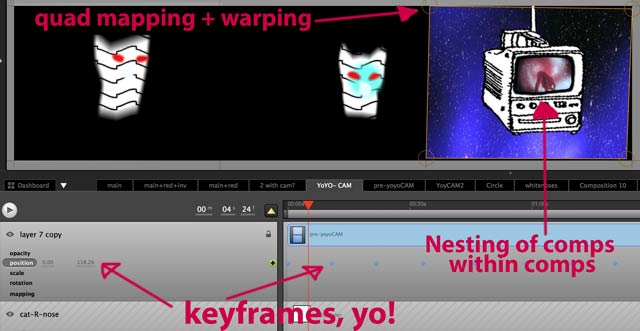 Room for improvement? There are lots of little user interface quirks that could be removed / better designed. Admittedly this is partly because Millumin reminds so much of video editing and compositing software – which brings a whole bunch of fine-tuned expectations – and sets an unfair benchmark – relatively new software made by one person could hardly be expected to match the resources and foundations of established editing and compositing software.

Video compositors will find it a pleasure to be able to create complex compositions, and nest and even animate these comps within other comps. In this respect Millumin is the closest thing to a real-time After Effects that exists. Sequencing and switching between various comps is trivial to implement…

.. and these ‘presets’ / ‘dashboard selections’ – can be triggered from other software using midi or OSC – eg the M1-m10 presets built into a VDMX control surface window below.

Millumin can also take in as many syphon inputs as can be thrown at it – which integrates it well with VDMX’s capacity to send out many. All of these can be composited differently in Millumin’s compositions, allowing for a huge amount of flexibility and convenience. (Snap below includes sequined ninja in oyster cave footage used at recent Dark Faux Mo festival in Hobart.) 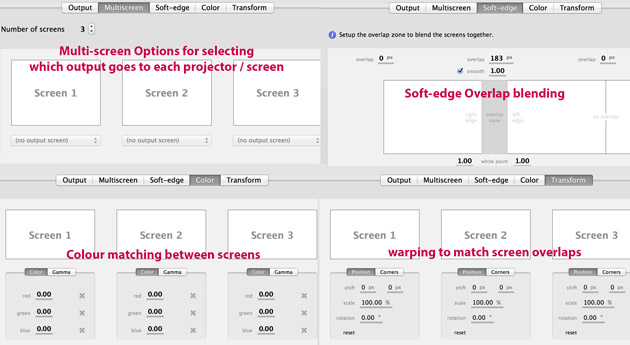 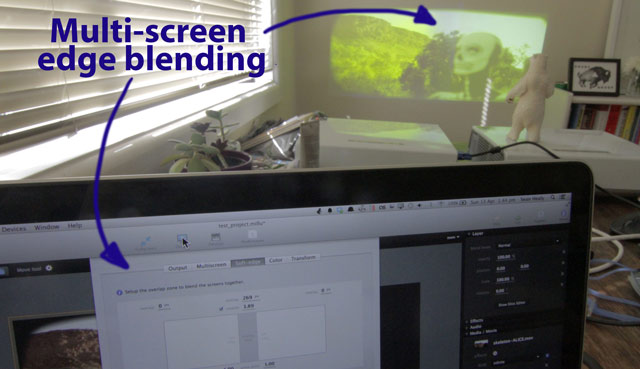 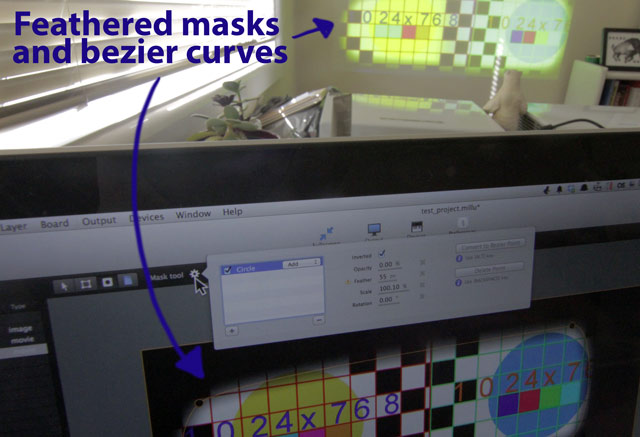 Room for improvement? Being able to work better with multiple projectors that have different aspect ratios to each other.

As a standalone application, Millumin has a limited range of visual effects. On the other hand –  deep syphon integration means easy piping in of video from other software, for sequencing or compositing, and quartz composer integration means being able to easily add customised QC elements, effects and compositions to any of that video piped in.

Requirements:
– Mac OSX 10.6 or later. (PC version in the pipeline)

– 599€ (VAT not included) = A license for Millumin on 2 different computers. for 2 computers . Educational and rental pricing available by negotiation.

Verdict:
Millumin is very thoughtfully crafted software, with a nicely expanding feature set. And while it’s missing refinement or lacking more detailed control in a few places, it continues to develop and evolve into a fantastic and versatile tool for live video, especially with multi-screen compositing.

– Lotech (NZ) for inspirational use of Millumin @ Splore – each VJ could send a signal into the machine running Millumin, which effectively let them play on a pre-mapped structure, and for ongoing feedback about Millumin over time.

– Jem the Misfit (NZ/Aus/Ger) – for highlighting how creatively Millumin could be used for compositing.