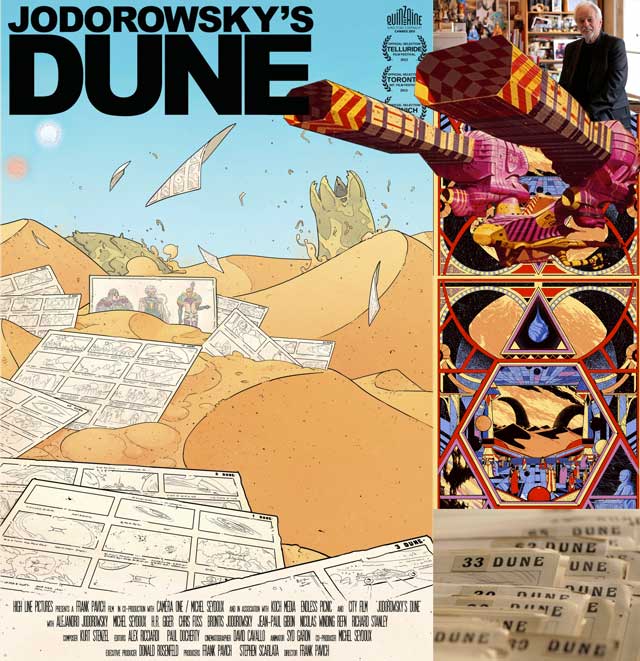 SYNOPSIS: In 1974, Chilean director Alejandro Jodorowsky, whose films EL TOPO and THE HOLY MOUNTAIN launched and ultimately defined the midnight movie phenomenon, began work on his most ambitious project yet. Starring his own 12 year old son Brontis alongside Orson Welles, Mick Jagger, David Carradine and Salvador Dali, featuring music by Pink Floyd and art by some of the most provocative talents of the era, including H.R. Giger and Jean ‘Mœbius’ Giraud, Jodorowsky’s adaptation of Frank Herbert’s classic sci-fi novel DUNE was poised to change cinema forever.

“For me, Dune will be the coming of a god. I wanted to make something sacred, free, with new perspective. Open the mind!”
– Alejandro Jodorowsky

Finally got to see Jodorowsky’s Dune recently (with long-time fan, and comic-book genius, Gregory Mackay, who is is great for detailing the sordid history of sci-fi illustration). It’s an incredible story of an incredibly audacious and film…. and although that feature never got completed, the documentary shows how lots of the creative energy involved was rewarded elsewhere later.

Jodorowsky’s Dune – plays at the Melbourne Film Festival in July 2014.

Alejandro Jodorowsky : “I ask of film what most North Americans ask of psychedelic drugs. The difference being that when one creates a psychedelic film, he need not create a film that shows the visions of a person who has taken a pill; rather, he needs to manufacture the pill.”

Holy Mountain – another quest for enlightenment, with vast and ambitious set designs… thanks to an increased budget of $1million from a Beatles business associate (John Lennon was a huge fan of El Topo).

Following the success and acclaim for Holy Mountain… his next wish was to adapt Frank Herbert’s Dune, as a psychedelic space opera, a spiritual film for transformation…  And in 1974 French producer Michel Seydoux offered to finance the start of it.

Amongst the formidable artistic army gathered to make Dune :

So the world’s greatest ‘psychedelic space opera’ never got made…  but director Frank Pavich did a great job of teasing out the possibilities, ably assisted by the subtle storyboard animations of Syd Garon (director and animator of Wave Twisters, yo!). More importantly though, the director was able to reunite producer Seydoux with Jodorowsky (after 30 years!), and Seydoux not only co-produced Jodorowsky’s Dune, but also went on to produce Jodorowsky’s first film in over 20 years: Dance of Reality (another incredible film!).