Over the past three semesters I’ve had the pleasure of co-steering a studio elective with Caroline Vains, for Interior Design students within the school of Architecture and Design at RMIT. Loosely – we’ve been exploring the intersection of video projection, built objects and interior design.

Most interior design students are already highly visually literate, great at quickly visualising their ideas in many ways, and unlike most video oriented people I know – are fantastic at working with materials and constructing models. As well as adapting very quickly to the world of projected video, they also bring along considerable materials testing, research and construction skills.

This semester though, we added interactivity as a requirement. In addition to learning video editing, video composition, animation, and projection mapping – they needed to think about how they would include some simple lo-fi interactivity in their projects. It’s quite satisfying to report that they responded wonderfully to that challenge, and I’m happy to share some of those efforts below. 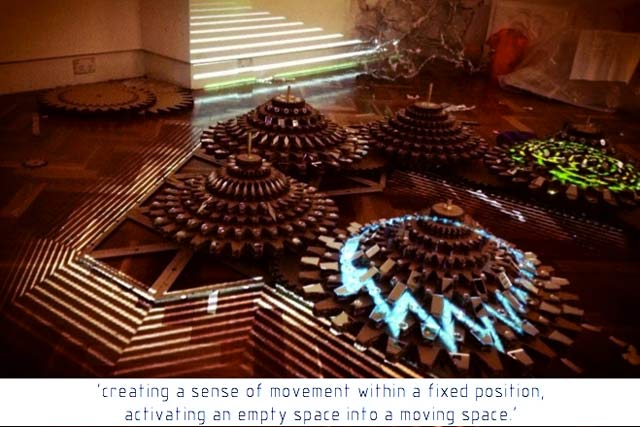 Pictured above –  the crowd-pleasing bicycle powered installation by Jimmy Liu, David Dai and Nick Hsu. (‘Team Brothers!’ ). A series of reflective gears were connected to pedals and a bicycle seat, causing the carefully mapped projections to reflect around the space. This was a nice evolution from their earlier experiments which included tight geometric mapping sequences, and three dimensional arrangements of laser-cut paint splashes.

Part of the pleasure with this studio – is seeing how different skills and ideas merge, and evolve, over time. For example, Hexin Bi used his experience from scuba diving as the inspiration for his audiovisual installation, rigorously analysing the rhythm of his underwater breath…

.. while Jacinta Birchmore explored repetitive forms and texture, beginning with the intricate model below, before iterating through other shapes and surfaces. 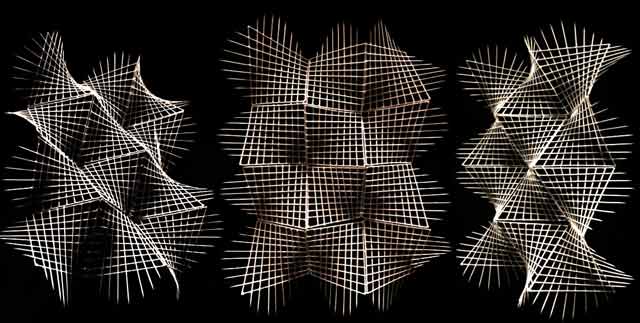 Together for their final piece – they continued to explore scuba diving, but took it in a new direction, creating a breath activated installation. Their structure featured a layer of styrofoam balls which obscured the projector light from shining through, unless someone blows through the mouthpiece – which scatters the balls and enables the animation to bounce around inside their mirrored space (a process accentuated by a breath-powered spinning reflector ).  Guest blower: Ramesh Ayyar.

Tisha Sara Dewi, Jing Yang and Ranqi Liu created a beautifully made cone structure, to be viewed from underneath:

.. later combined to produce a quite beautiful structure (which unfortunately had a few interactive / mechanical problems). 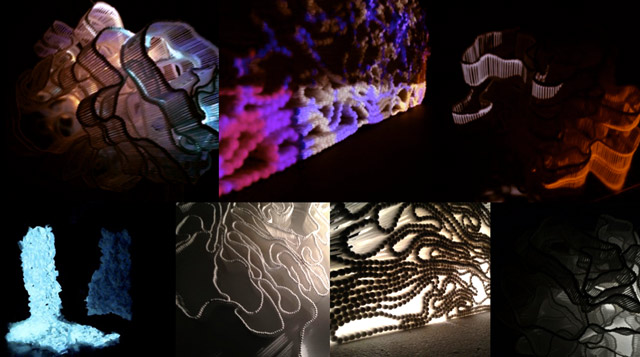 Together that trio diligently combined their efforts to produce a wooden bicycle work – which featured a pair of revolving wooden cylinders, each with precision cut holes, and a bicycle wheel on top for spinning the cylinders, altering the light patterns being emitted from within. 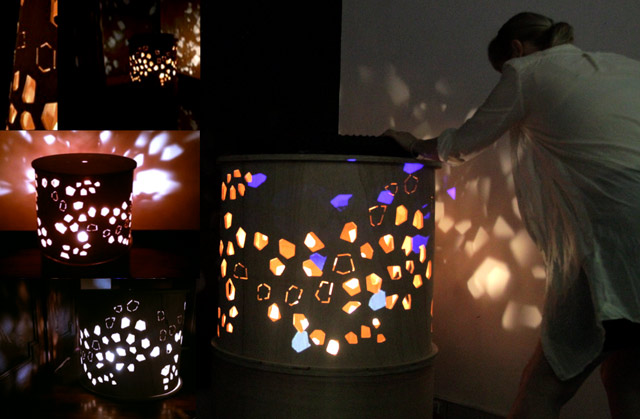 Aside from the prowess with construction, another trait interior design students seem to share – is a flair for dynamic documentation, very comfortably playing with formats and materials to best express their projects. Below, a couple of examples by Stacy + Jimmy.

Below, the projects grouped as part of the final exhibition … (note the bicycle pedals for activating the ‘Team Brothers’ piece at the top of the page). 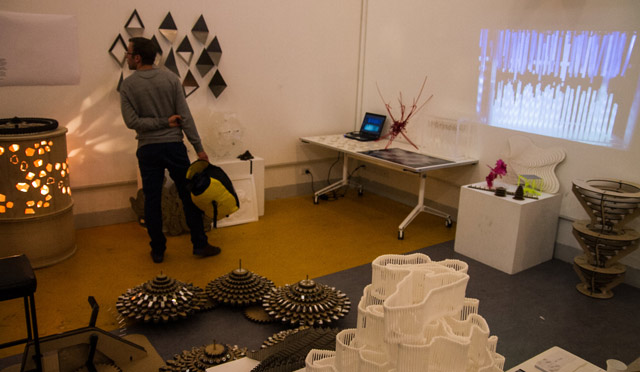 And finally, studio co-ordinator Caroline, wondering where the semester has gone to… 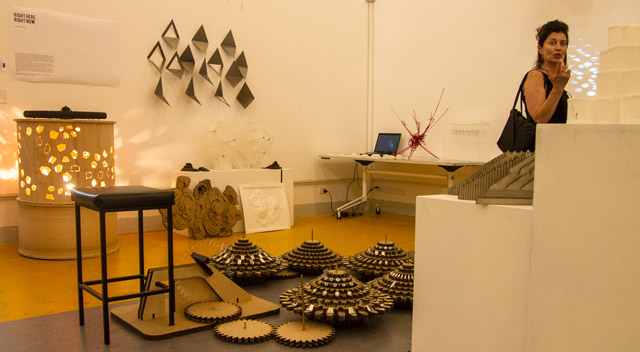 Thanks to Caroline and the entire studio for a great semester!