Warning: playing around long enough with 2D billboards and sprites (to display images) inside Quartz Composer, will eventually lead you to a third dimension. Fear not, inept explorers before you have survived, and they’ve even left some string at the edge of the cave:

Playing with 3D in QC

1. Create a new clear patch. This creates a blank background, choose colour in its inspector.
Type ‘clear’ into the library window, drag and drop a ‘clear’ patch onto your editor window.

2. Drag a ‘cube’ onto your window too.
Drag a movie from your hard-drive, into your window. Attach the image output to one of the image inputs of the cube.
Play with the rotation and x / y / z values of the cube in the inspector, and you should see video on one side of the cube.
( Tip – When adjusting Quartz parameters, adjust at 10 x speed by pressing shift at the same time, helpful for quicker compositing.)
You now have video playing on a 3D object in QC. Woo!

3. For easier 3D space manipulation try using a trackball. Drag one in from the library. Click and drag to select your cube(s) and movie files, then press command + x to cut them. Leave the clear patch. Double-click the Trackball patch to go within it. Paste (command + v) your cube here. Now try clicking and dragging on your QC viewer window – the trackball enables this more intuitive navigation / perspective alignment. (Click edit parent in the editor window to go back to your upper layer patches at any time.)

(Similarly, the 3D Transform patch can be used to allow easier control of 3D space. For example, placing several 3d objects inside a 3D transform, allows easy perspective adjustment of the whole scene by changing the 3D transform parameters.)

4. To add complexity – drag a ‘Replicate in Space’ patch from the library into your editor window, and place beside your cube. Again select your cube(s) + movie(s) + cut these. Double click to go inside the Replicate patch, then paste these inside. Play around with the Replicate parameters and watch the results. 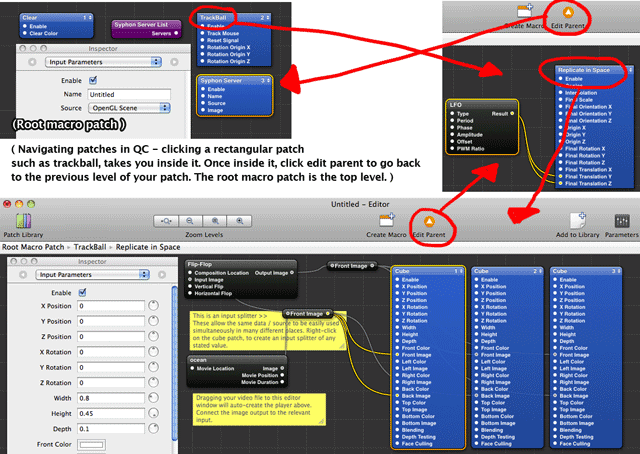 3D experiment quartz patch ( Update the movie location to match a video file of yours, or delete the included movie link, and drag a movie into the editor)

Playing with your 3D QC file inside VDMX

Option 1: Drop it into the media bin and it should playback the 3D model with pre-connected movie.

Option 2: To use the QC file as an effect – allowing any clip being played in VDMX to appear on the cube – we need to do a few things :

– So that the video input is user defined rather than pre-defined, the root macro patch needs ‘an input splitter of type ‘image’ set up receive the incoming video stream‘.

– To enable any of the QC parameters to be adjusted live inside VDMX, we need to adjust the relevant parameters in the QC patch. This is called ‘publishing an input in quartz’ ( and enables that QC parameter to be adjusted within VDMX –  see instructions). However – slight complication – these need to be published in the topmost layer of quartz ( ie the root macro patch) to be accessible in VDMX. So if you’ve published an input within a subpatch of your main patch, this won’t show up in VDMX. To solve this, publish the input at the layer of QC you are in ( eg inside a replicate in space patch), then go up one level – this published input will now appear listed in that patch ( eg replicate in space). Repeat the process of right clicking to publish again, and it will appear in the next patch up, and so on until it appears in the root macro patch.

– Save the QC within your VDMX QC FX folder. Select it from assets ( if needed, refresh via VDMX > prefs > User paths ). Whatever VDMX clip is playing will now be composited onto the cubes. Dude! OH: and click-dragging in the VDMX preview window works for the trackball navigation, the same way it does within QC.

3D experiment quartz patch for VDMX  (Drop into VDMX QC folder. Change parameters in this QC patch, save as new name in the same QC FX folder, and you’ve got as many new 3D compositing tools as you want.)

Drag the v002 model importer into your editor. For ‘model path’, enter the address of a 3D model. (Drag a 3D model to the editor, click it, select path in inspector, copy and paste into v002.)

Connect an image or video to the v002  Model Importer ‘image’ input, to texture your model.

Install Syphon Recorder.
Install the Syphon for Quartz Composer plug-in.
Put ‘Syphon server’ into your toplevel Quartz editor window. To use the OpenGL scene as the source, set this patch to be the last (top) layer rendered. ( ie – click on the right of your syphon server box, and ensure it’s number is higher than other layer.) This enables the Quartz output to be displayed within Syphon Recorder.

Open ‘Syphon Recorder’. Your quartz video should be already visible. Adjust recording preferences to suit (it handles 1080P fine on this 3 year old macbookpro), and hit record. It seems to manage 1080P HD recordings fine, and it even records alpha channels ( ie you can record audio-responsive 3D models on a transparent background, for easy compositing later into the likes of After Effects.

(See also: QTZ Rendang – Free software for rendering out quartz patches. Potentially useful for non-real-time rendering out intensive patches that give slow playback. Haven’t tested that yet though.)

– to Vade for providing both the v002 model importer, Syphon and the Syphon recorder, which makes a lot of the above possible.

– To VJ Shakinda ( co-author of a forthcoming book on QC with @momothemonster) for his trilogy of 3D tutorials on youtube, which really helped me get to grips with 3D in QC. If you found this stringy guide helpful, wait until you’re bungee jumping with this fella: