Let There be Light..

Winter in Tasmania isn’t an obvious time and place for a festival, but MONA isn’t your average museum / gallery. And so began in 2013, MONA’s DARK MOFO (Jun 13-23), an annual festival that riffs on the idea of winter solstice with pagan celebrations of light ( + art, fires, lasers,  feasting, etc..). This included:  the Red Queen exhibition  @ MONA,/ performative chefs, Skywhale (a sculptural / sky-breasted hot air balloon by Patricia Piccini), Robin Fox laser performances, and a whole host of other light and projection related artworks…

… All of which were made irrelevant by Ryoji Ikeda‘s 5KM HIGH BEAM OF LIGHT INTO THE SKY ( aka ‘Spectra‘). 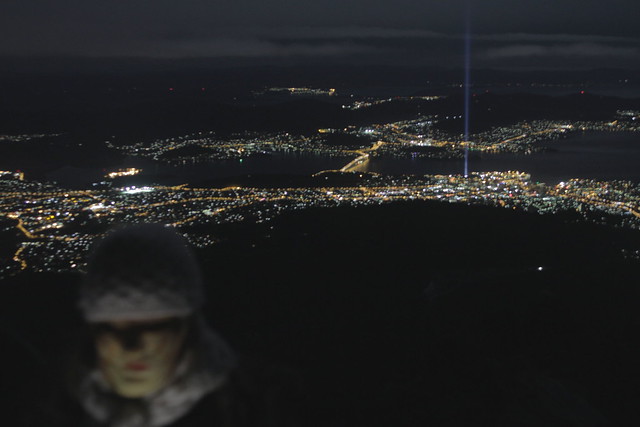 Simultaneously over at the gallery, Ryoji exhibited his Datamatics work. Really enjoyed this more than expected. It’s a very well documented and promoted work, but none of that captures the oddly calming oceanic presence it has.

The Beam in Thine Own Eye exhibition gathered together a range of works exploring the limits of perception. Zee by Kurt Hentschlager was the most spectacular of these, an intensely stroboscopic smoke filled room, that came with pages of warnings, had medical staff on standby, and completely blurred the capacity to distinguish between what was happening in front of or behind your eyes. There’s a great interview with Kurt here. Other standouts:

Ivana Franke – “We Close Our Eyes and See A Flock of Birds” -A cyclinder shaped room, with central seating, facing out against LED covered curved walls, which proceed to strobe and flash their way through a range of sequences.

Anish Kapoor – “Imagined Monochrome” – An artwork experienced one at a time – because it involved laying down and having your *eyeballs* massaged by a professional eyeball masseuse. I missed getting an appointment for this, but apparently it was fantastic.

DARK FAUX MO, the festival club –  is what I was there for – projection mapping a disused double-storey theatre space each night. Performers included Miles Brown, Super Wild Horses, ZOND, My Disco, Zanzibar Chanel, Mixmasters ( who cooked soup + dumplings on stage while they DJ-ed some tracks), Andee Frost, Rainbow Connection DJs and more. It was a wild space, delightfully decorated, with lots of roving performers – so it came up great in photos. (Eg collage at the top of this post – or see flickr photo set)

MONA FOMA 2013, the summer edition.. held in a Hobart laneway, where I projection mapped animations onto a 4 storey fire escape (painted white).