Riding a bicycle downhill to the studio today – with blues skies all around – really felt like spring arriving. Winter seems to take longer to leave Melbourne than anywhere else in Australia, which is maybe why there’s so many visual art events crammed into the wintery months here. Samplers: 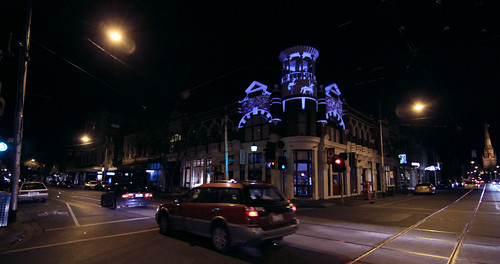 This grows nicely each year, transforming lots of shopfronts and buildings in Gertrude st for a week. Above, a nicely mapped facade by Olaf Meyer. There was apparently a pretty good opening night party of projections, which I missed due to projecting elsewhere for the Scattermusic label launch party. Below, a mapped sculptural piece by studio neighbour, Kit Webster, alongside a fancy dress store where peering into a camera projected your face onto that of a shopfront scuplture. (More projection photos). 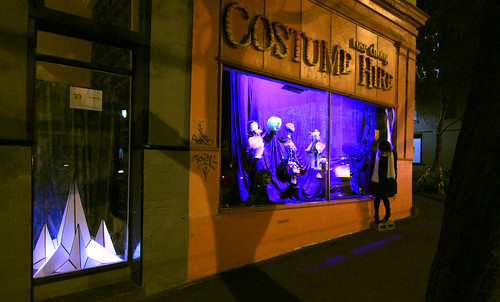 The National Gallery of Victoria convinced some local comic artists (Pat Grant, Mandy Ord, Michael Fikaris and Simon Hanselman + more) to transfer their private studios into the the public spotlight for a few weeks. The results included a zine fair, 24 hour comic jams, tents and drum-kits set-up in the studio, drawing lessons, an Inherent Vice tumblr and a steady stream of bug-eyed kids and adults wandering through. Check the article in the Australian, or the artist interviews on the Age website.

I went to this because local video artist Lucy Benson, now in Berlin, had a hypnotic piece in it – ‘Gotta Sleep now’, but my camera phone couldn’t really capture her shimmery work. Below, a sculpture that nicely incorporates video and little people. Can’t figure out from the event page who actually made it though, maybe you can. Nice idea for an exhibition, and great to see the different interpretations of the tracks. 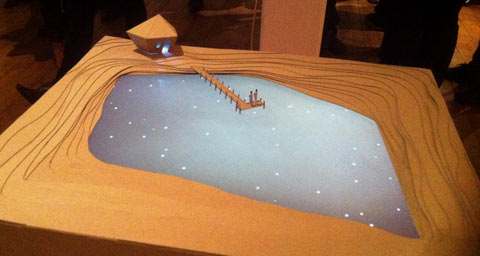 Hadn’t even heard of the warehouse venue Nosaj was playing at – Revolt – and arrived to a building crazily decked out with technical and bar infrastructure, including pyramid mapped video sculptures by Kit in the distance. Came complete with a 90s black light chill out room. The Nosaj set was great, the rest of it got a bit wonk-saturated after a while.

Zeal and Time Shield have been steadily honing their AV performances around town, and recently Zeal invited me to do an AV set at Bar Open in support of his threepiece Virtual Proximity (see above). I was quite happy with this set, playing with some ambient music, ocean footage and quartz patches in VDMX. Elsewhere, Sampology came down from the subtropics to do an AV show, and Naysayer and Gilsun more recently launched their new AV set. There be audiovisual things happening. (Often at Racket – first thursday of each month at Miss Libertines in the city, and Plug N Play – last Thu of each month at Kent st bar, Fitzroy. )

MÖBIUS from ENESS on Vimeo. This ‘collaborative stop motion scuplture’ was the brain child of Benjamin Ducroz, an extension of his work with time lapse and physical sculpture – this time using lots of help from public volunteers in rearranging the pieces over and over throughout the day.