Alarm clocks transforming into helicopters that fly out the window, meat-heads thumping their steak-as-heads in the shower, fish that jump through the floor, and zooming visual loops all seamlessly splash about the palette of the most relentlessly visual inventive animators working today – Run Wrake. With a decade of illustration work for the UK’s NME magazine under his belt, as well as music video clips for Future Sound of London ( We have explosive & Papua New Guinea ), U2, Stereo MCs, The Charlatans & quite a few for Howie B, Run Wrake has a long tradition of visualising music. A master of mixing together ever eclectic animation styles from photocopied

textured to 3D, his work reaches it’s pinnacle in his short films, a collection of sublime and audiovisually intertwined animations ( available in a Run Wrake DVD compilation through Shift in Japan ). Most recent of these, his “Rabbit” short film has just picked up a few animation awards, something dwarfed by the arrival of a baby in his world (‘February has been quite a month’). Am most delighted he had time for a brief interview, be sure to catch his work in motion, where there is so much to marvel at.
Where did ‘Run Wrake’ come from?
Actually a nickname earned whilst keeping wicket particularly badly during a game of cricket aged 11. A friend was sent in for sarcastically shouting ”Run”, as the ball went thru’ my legs for four.

What have you worked on since the material in the Runwrake DVD?
Various projects: promos for Charlatans and Asian Dub Foundation, visuals for U2, Oasis and Live8, and a new 8 minute film called ”Rabbit” which is being very well received, nominated for a Bafta, and awarded Tiger award for short film in Rotterdam. Hopefully showing at a festival down your way soon. For more details and clips, go to http://www.runwrake.com, my recently updated site.

Animators, directors, musicians, writers who’ve inspired u?
Too many to mention. Currently going through a Dylan phase having recently discovered ‘Blonde on Blonde’. ”Hotel Rwanda” also blew me away, a brilliant and shaming film.

>>Currently inspiring about the form and possibility of animation?
Same as always, the endless possibilities.

>>How much time does the DVD represent, being such a daunting body of work?
The DVD covers the period from 1988 – 2000, but is by no means everything done in that period, maybe under half.

>>With so much animation under your belt, what has it taught you?
Its taught me that I’m very lucky to have the desire and ability to scrape a living doing what I enjoy, and that you will never make a piece of work with which you are entirely satisfied

>>Describe a ‘typical’ runwrake process for making a videoclip from start to finish?
I like to have as much time as possible at the beginning of the process to mull things over, not always possible with commercial work, and then it tends to get a momentum going until becomes obsessive until completion

>>Soft/hard-ware you play with?
Photoshop, AfterEffects, a little junior3D with Bryce and Poser, and hands holding a variety of implements.

>>How have animation tools improved since you’ve been using them?
Computers, and particularly After Effects/ Photoshop, have revolutionised the process for me. Everything pre-1998 was hand drawn and painted, cut out with scalpels and spray-mounted on to cel, shot and cut on film.

>>What animation tools do you find it incredible that we are still without?
The button on a mac that can read the images in your mind and instantly recreate them on screen.

Noticed you’ve been VJing – what do u enjoy / dislike about real-time explorations & tools?
Generally I enjoy the cutting loops to rhythmic music and the ability to do so whilst imbibing alcohol.

What animation/video processes are you enjoying at the moment?
Same old, same old. 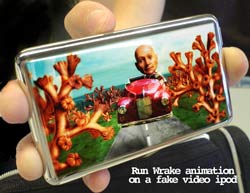 Current projects? Future plans?
Currently working on an ad for Natrel milk in Canada to pay off the taxman

Any desire for feature films, or longer works?
Absolutely, watch this space

PS. In response to a question about when he was going to animate a skateboarder, he even sent a tiny sk8 loop he’d made!