Those around the world oblivious to the allure of a javelin or shotput, are being drawn to Melbourne by the spraycan. First up, there were the waves of controversy generated around an exhibition and launch for a book claiming Melbourne the stencil capital of the world (book link). As the inevitable wave of Commonwealth Games inner-city ‘cultural cleansing’ kicked in, the book launch and exhibit found itself under harsh tabloid media spotlight, and the brunt of much scorn from authorities.

Stencil capital of the world, or as the local tabloids frame it:
“A Herald Sun investigation has found: MELBOURNE is one of the five worst cities in the world for graffiti.”
( link to pay-for-view article, found via this flickr photo melb graf discussion)

‘The Age’ review of the book, Wooster Collective on the controversy, Ektopia book review.

Then of course, the Graffiti Games (covered here), which parodies the Commonwealth games site, was always going to attract trouble with statements like this :
“During the Graffiti Games, which begin next week and end in April 2006, the entire Central Business District has been declared a â€œmaximum tolerance zoneâ€ open to street art of all forms.” Offering medals for events like ‘Most Elaborate Stencil Piece’, ‘Largest Graffiti Piece’, ‘Most Daring Placement’ & ‘Best Caricature of the Mayor or other City Of Melbourne Councillor’ must’ve proved endearing to local law enforcers too.

So it’s no great surprise they have been threatened with legal action, the site currently displaying ‘graffiti games logos buffed due to legal threats’. 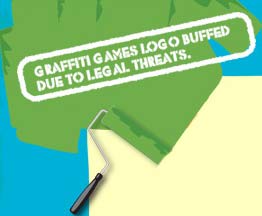 And it seems, they are paying attention even back in the ‘motherland’, with artist Banksy scribing a Guardian article about the Melbourne graffiti crackdown and what that might mean for London in the 2012 olympics.

“Melbourne and London are genuine epicentres of the skewed human touch that can bring a little sparkle into the drudgery of public space.”

In the end however, the graffiti crackdown was only superficially aimed at the route between the Games village and the city centre, and any zero tolerance approach is doomed, as this Age article explains:

“Artist (but not graffitist) Patrick Jones came up with the idea of a roaming wall of graffiti to take the best of street art to visitors in the city during the Games. Mr Jones and four others yesterday paraded through the CBD carrying photographed stencil art on five big panels. In formerly graffiti-filled laneways that have been painted over by the council, the group showed their mobile graffiti.
“We received a lot of support, especially from international visitors, with lots of people taking photographs and talking to us,” Mr Jones said.”

Says another graffiti artist: “They didn’t really buff that much (only on the routes between the athletes village and the venues) …. and anyway, I consider it all as fresh canvas anyway.”

The Melbourne Stencil Festival 2006 happens in late May.