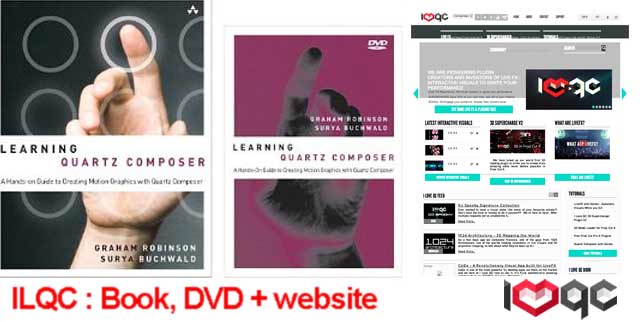 “Whether you dream of live visuals, interactive installations, Cocoa apps, dashboard widgets, or extra awesomeness for your film and motion graphics projects, Quartz Composer will enable you to develop beautiful solutions in amazingly short periods of time…”

“….To make up for all the gaps in video tutorials and forum posts scattered around the interwebs we wrote a book…”

– Graham Robinson (aka Shakinda) + Surya Buchwald (aka Momo the Monster)

A Quartz Composer book has been long desired by the real-time video community, given the combination of its unique capabilities and severely undercooked documentation online. Hats off to Graham and Surya for rising to that challenge, and helping expose QC’s potential for visual artists of many flavours.

These days a book inevitably also means an accompanying DVD of video tutorials (which can also be accessed online by those who buy the PDF, book code needed), and an extended support website (ILoveQC).

Who Should Read This Book?

According to the authors – Maker types /Motion graphics designers, film makers, VJs, artists, interactive programmers, and Cocoa developers. If that’s you – this book will help – “…even the unsophisticated user into creating art projects, visuals for a band or party, wild Preface screensavers, and RSS-powered trade-show kiosks. For anyone with a programming background, the material quickly opens up a new world of visual potential”.

Who shouldn’t? “Advanced Quartz Composer users looking for detailed knowledge about using GLSL and OpenCL, or creating your own plugins in Objective-C..”

How’d that work out for me?

To give some context of my QC understanding – previously I’d been asked by Graham to write a few words about how I use Quartz Composer and VDMX:

“Coming from a non-programming background, I’ve found some of the concepts and structural logic of Quartz hard to grasp, and the engineerish manual doesn’t help much. Kineme.net and the QC mailing list – seem helpful, but also populated by mostly advanced discussions – which tends to stifle introductory questions and beginner problems. So I found myself trying to learn QC by forcing myself to explain what I was learning about it as I explored it.”

What I found myself really craving was a learning resource that broke down the structural logic of QC, and which explained some of the principles in ways that related to how I wanted to use it as a compositing tool. And this, the ILQC book mostly delivered – using deliberately plain and simple language, and making no presumptions about animation or programming knowledge. A quick glance over their contents page, gives an idea of the book’s scope:

(‘glance inside‘ / book preview at amazon )

– The examples are well chosen, and build up on skill levels as the book progresses
– The book examples and video tutorials correspond really nicely to see each other
– There’s a good emphasis on concrete examples, while explaining the principles that make it possible
– That said, found myself wanting some more explanations of underlying concepts occasionally
– Gaps? Would’ve liked some more advanced exploration of:

This book fills a great gap in learning resources for Quartz Composer.. so hopefully rumours of QC’s gradual demise stay that way, and some of the recent flourishing of QC activity ( as an interactive prototyper / and as discussed on the very active Quartz Composer Facebook group ) continues on.