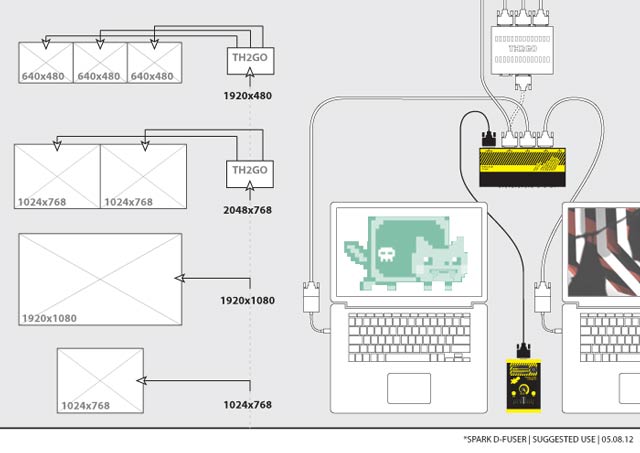 “The *spark d-fuser lets you crossfade between laptops. Whether switching between presenters or pushing avant-garde pixels, hands-on control for mixing DVI and VGA signals is now available in a compact and affordable package.

If you want to know more or see it in action, jump straight to the demo video below. If you’ve been following the project, the message is simple: pay and yours will be produced. Orders are being taken on September 5th, the manufacturing run will then take six weeks from there. Price: £710 ex. VAT, £852 inc. VAT.”

We have no jetpacks, but soon it seems, we will have affordable mixing of digital video signals, thanks to the herculean efforts of 1 x Toby Harris aka *spark aka ‘card carrying Timelord amongst VJs’.

Rattling along in the tube, in between bankers reading 50 Shades of Kindles… Toby envisioned a better world, a world where VGA and DVI signals could be mixed without repercussions, and a world where smooth crossfading could happen with a device carried in your backpack. It was also a world that he would have to build himself, and a couple of years down the track, here we are. In between priming conveyor belts and supervising factory elves, Toby was kind enough to answer these questions:

What have you enjoyed about using your prototypes during performances?

The mixer for me is in support of the laptop, and damn have I enjoyed pushing crazy pixels with my laptop. Using it two-up in a D-Fuse show with Mike, I’m freed from the need for it always to be my mix on screen, so I can rip down, prepare and experiment with the mix. Makes me push things much further! That, and I’m freed from the fear of my bleeding-edge software taking down the whole show.

The surprise for me was the tap buttons, I love them. The original prototype didn’t have them, I envisaged a cross fade from one to the other and not much else. But in the expression of interest form, lots of people asked, so on they went… and wow, tapping in a slight variation of the main laptop’s mix is a really powerful thing.

What sorts of firmware additions would you like to see / develop? (you mentioned multiply mode as an option once?)

Mix modes are in the realm of possibility. The processor has the power to compute a soft-edged key for every pixel, so there’s some per-pixel computing power to play with. Additive is the bangs-for-your-buck upgrade here, and I think would really creatively transform what is possible with the mixer as you get the ability to truly composite the two sources together. I talk about this at the end of the demo video, and I’m really trying to make it happen.

I’d love to see the processor lose its line limit of 2048 pixels, there’s the naive observation that TripleHead 800×600 should be possible given that is actually fewer pixels to process than the 1920×1080 it definitely can handle. TV-One have in a way already answered this in the 1T-C2-750‘s sibling, the 760. It can do 2880×900, but at the price of being able to fade both sources.

You have to realise however it’s TV One’s processor, and the firmware that runs it is very much their core product, their IP. There’s no possibility of them giving it to us to do, and them doing anything for us is a decision intertwined with their wider business plans. I wish it weren’t so, but the sheer fact they designed the 750 and produced it for an affordable price is something to wonder at.

Why release the firmware as Open Source?

The frustrations above should go some ways to answer! If you need to tweak, extend or optimise, its in your own hands, and in the best case that gets shared back to all. Simply put, its what I would want if I were in the community buying one. There is more to it than that, and there certainly are risks, so let’s call it an experiment and see how it plays out.

Why has the video hardware world been so slow in releasing affordable digital mixers?

Well, one thing I can say is that this project has been one of the most ridiculous things I’ve ever done in terms of effort and reward – if I had an eye on the bottom line I’d have stuck to bespoke development and on-site fees! There’s obviously a quantity sold at which point that changes, but I’m not sure that quantity is comfortably within the VJ market, and I’m doubly not sure of that if you have the overheads of a worldwide corporation.

I’m surprised however that VJs haven’t been able to co-opt generic presentation kit, the 750 is as close as I’ve seen.

In what kinds of ways have you played (live) with the OSC / DMX and ethernet capacities?

The simple answer is I haven’t – the ability to have that is everybody’s gift back to me for doing this project, along — hopefully — with additive mixing. Come the first D-Fuse gig with the new controller, we’ll be rocking the OSC out. Finally we can cut between visual laptops and have the audio follow!

Orders for the *spark d-fuser are being taken on September 5th, with a manufacturing run from the 10th September. Price: £710 ex. VAT, £852 inc. VAT

[Another interview with Toby, about Live Cinema, in 2008]