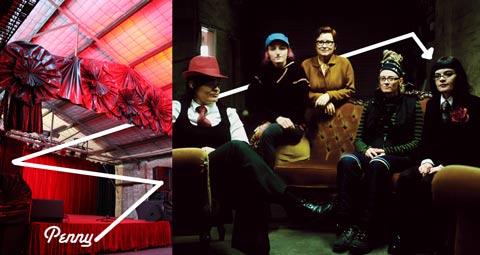 What was the catalyst or the final straw which inspired the ambitious Red Rattler plan into motion?
The shut down of LanFranchis and the close of Space3 were the big ones, on top of a big list of artist run initiatives (Squatspace, Phatspace, Gallery Wren, Imperial Slacks, The Wedding Circle, Mekanarky Studios, Knot Gallery and just this year Gallery 44, and Medium,Rare) that’ve been forced to close in the last decade due to developers, landlord trouble, rental increases, neighbour complaints and other systematic shut downs including government and council regulations that make building compliance inaccessible and impossible for non-profit artist run spaces.

The constant police appearances, shut downs and fine threats were exhausting. Our events didn’t fit into pubs and clubs, we couldn’t afford other spaces, and the atmosphere was all wrong. So a group of us (five women: Meredith Williams, Patsy Black, Teresa Avila, NDY and myself) got together and started talking about ideas for a permanent space, a legal independent creative playground. We knew that the kind of budget and workload required to set up a legal space under today’s legislation would be huge and investing that into a rental was risky, so we emptied our pockets, shelved our personal dreams, harnessed the security that comes from working full time for 10-15 years, and collectively bought a warehouse in industrial Marrickville.

Is there something of a resurgence in artist run spaces in Sydney now?
Spaces open, run for a while, then get shut down and people spend some time feeling loss and remorse then start getting active and open up new spaces, its a cycle. In Marrickville, there is a buzz of new spaces brewing incorporating artists studios and one-off events. There are five or six ARIs currently looking into establishing themselves as legal places of public entertainment, rather than exclusive galleries, there are a few galleries already, but it is a bit difficult to get people to come to the inner west for art on the wall, don’t know why, but they do come out here for performance nights, film screenings, workshops, and sound or music events.

What have been some of the biggest challenges in setting up the space?
In NSW you need a POPE (place of public entertainment) license to host an event in a space. This legislation, full of exorbitant fire safety compliance, toilet quantities, and disability access requirements is the killer. Dissecting the BCA (Building Code of Australia) is a nightmare, funding it is horrifying and currently there is no support network for helping ARIs through this process. This is by far, the biggest challenge we faced. After months of research, a zillion meetings with Council, external consultants, and certifiers, our set up costs doubled.

We project managed the process ourselves and completed much of the work ourselves (electrical, carpentry, tiling, plasterboarding, general building works) with an incredible amount of help and support from friends and family. It was hard and overwhelming, but we did get through, our DA was approved in November, our approved construction certificate in Dec and received our Occupancy Certificate in March this year, so we’re now legal, yay, we’re very excited.

Our latest challenge is wearing the ongoing strain of extra set up costs and not being able to run properly yet – we applied for a liquor license under the new state laws that came into effect in July last year and were advised this would be a thirty-day process, however after almost ninety days now, we’re still waiting.

What’s the Red Rattler plan for “running the space largely on renewable water and energy sources”?
The Red Rattler has a five-year eco-sustainability plan – we’ve installed water wall tanks for rain water catchment and have low-flush toilets throughout the venue. We’ve fitted low-energy lighting and power systems including LED stage lighting rig and low-wattage light fittings throughout the bar, toilets, theatre space and rooftop garden. We’ve installed whirly birds in the roof and smoke exhaust vents that double as air vents in the ceiling, which we opted for instead of air-conditioning. We hope to install solar panels to our roof down the track to ensure maximum use of green power, with a vision to feed power back to the grid. Plus our bar stock will include local, organic, and preservative-free products. We’re taking a 50c eco-tax off door tix, or for free gigs we ask punters to donate 50c as they come in to contribute to this sustainability plan.

As a member of a Artist Run space, what do you think of the proposal to spend $1billion dollars to upgrade the Opera house?
Injecting even a bit of this sort of budget into a support organization for ARIs and non-profit performance spaces would completely revamp this city. Firstly the POPE legislation needs to be revised for like spaces. Then we need a service to guide artists and small businesses through DA and BCA processes, and a funding program for fire safety and toilet upgrades. Even if funding came with a condition that once you did start to make profit, from running a bar lets say, you paid back into the fund to support new non-profit creative spaces. A sustainable grant program. Sounds great!