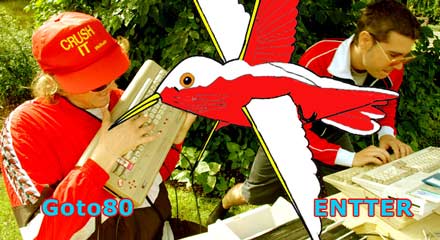 25 years after the Commodore 64 was unleashed, Sweden’s King Milker of it’s retrosonic glory is Goto80 ( aka Anders Carlsson ) who manages to coax 8-Bit reggae, bossanova, breakcore, metal and even country tunes out of that 64K.

SuperdÃ¶ner? 5-man rock band, based on Commodore 64 and Gameboy and an unhealthy obsession of bad taste.

Extraboy? Pseudonym I use to create slower electronica stuff – usually somewhere between electronic ambient and dub.

Labelable? Net label that invents new music styles. I’ve made most of the songs there under various silly names.

What’s so good about making music with the C64?

The C64 offers the ultradigital standard 8-bit sounds that everyboy recognizes from old videogames, but also has unique features – analogue filters, ring modulation and actual bugs in the chip = dirty digital lo-fi sound. I don’t hear anything else that sounds like a C64. It leaves a lot of room for experimenting since there’s hundreds of programs to use, all letting you program the chip directly and totally control what’s happening. The chip’s a beast that cannot be fully tamed, which’s what I really like in the end.

What else do you like to perform with at the moment?

On my live shows I arrange songs live, play melodies on synthesizers and do vocals. Usually I add effects as well, but keep it quite clean. I’d like to think that my live shows is not a typical introverted laptop show.

The micromusic.net website works as a community for mainly European people inspired by home technology, but it’s still growing with new headquarters popping up around the world. The micromusic or chipmusic scene has evolved a lot in recent years to include more vocals and other instruments and has been heard in mainstream music like Nelly Furtado and Beck. Other people than old videogame-nerds are using the technology, which means that you get banjo-gameboyers like Bud Melvin, jazz masters like YMCK, punkrockers like Maniac Mansion or furious drummers like Duracell.

Even Sex Pistols manager / swindler – Malcolm McLaren jumped on board for a while.. did he stick around?

Although a lot of things he said simply wasn’t right, I guess Malcolm McLaren did a lot for this music as he talked about it in the media worldwide. Describing it as 8-bit punk, he wanted to portray us as poor hackers manipulating obsolete corporate technology with ideals to fuck more modern ways of doing it. It sounds cool, but it’s not true. He threw some parties and released some records, but as far as I know he’s now doing something else. It was possibly the first time in this scene that there was reason to actually discuss “selling out or not” which made it interesting. Money and fame has never really been a big issue, though it might be in the future. Anyway, as far as collecting such a diverse range of people into one package to present as something cool, maybe he did a good job. But he’s just a fucking sell out 🙂

You often work with a dedicated VJ, Entter or Josssystem, in what ways do you collaborate / interact – in both production and live performance?

Me and Entter (Raul bb and Raquel Meyers) collaborate in producing videos and some music together. As they are Spanish, we do some things separately and some things when we meet up or have a residency like for our cowboy video “Microcolorado”, shot in the south of France earlier this year. They also made my websites, and karaoke-part on my upcoming album “Made On Internet” (Pingipung, release in October). For live shows, we sing together and they keyboard-VJ in innovative and frenetic ways, much like my music. Jossystem from Sweden programmed a specific Goto80 VJ-tool to for easy improvisation with random parts of the memory to create some of the most beautiful data trash known to man. They also made some videos for me, and remixed my music under various names.

An audiovisual, glitchy C64-video that me and Entter made this summer in Spain, based on altering the data of games and music. We used a C64 with a special cartrdige to gain access to the memory. With a complete listing of the memory, we would put random numbers and letters into the memory to manipulate graphics, sound and functionality. We could also pause the games and alter the graphics on the screen, and see what would happen we would run it again. We recorded it to VHS and edited it, and voila! I also made some live remixing of my songs with the music program that I’m using, spiced up with some RAM-hacking as well.

Seems you’ve been gigging busily, what’ve been some recent highlights?

Just had a 2 week European tour and before that a Swedish tour with Entter and Meneo from Spain. Maybe it’s the first time a chipmusic act got thrown off stage (3 times!), when Meneo and Entter got naked on stage in Stockholm. The Blip Festival in New York – with more than 40 chipmusic artists from around the globe – was great, playing in an old bank 10 meters from Wall Street. Also, me and Entter played at the alternative stage at the Metro Dance Club in Southern Spain, this huge techno club where I felt really out of place. We actually managed to get the people dancing to the sounds of Commodore 64! People came expecting the usual 4/4 bassdrum kicks, but we hypnotized them with lo-tech beats and super pixel visuals! Great experience.

You’ve released so much music both for sale and free download, what’re your thoughts on music distribution?

When I release music commercially, I try to include special things that you can find if you put the CD into your computer. On “Commodore Grooves” I had 1 extra hour of music in various obscure music formats but also texts, videos, pictures, etc. On my new album “Made On Internet” you can put it into the computer to run a special karaoke program to sing along with some of my songs.

As I don’t buy much music myself, I don’t demand that other people pay for my music. But if you’re an artist who can almost make a living out of it, and needs to get more money to do the music properly, it’s a shame if they have to stop just because people don’t support them financially. Doing it yourself – without labels, distributors, etc – is hard work and I for one don’t really like it as it has a lot to do with words and contacts rather than only music. I’m really happy to have Pingipung to release my next album, as they are both good people and a good label. 🙂

Timbaland calls you, wanting to collaborate – what questions do you ask him?
Timbaland took a complete song made by two friends of mine, and used it in a Nelly Furtado song without credits. I’m not one to complain about sampling and stealing, but this was maybe a bit too much since the whole song was sampled with only some basic additions (apart from the vocals). If Timbaland approached me with a very good idea, I’d first make sure to have some agreement before getting to work as I’ve had days of work disregarded because of big record companies “finally not liking it”. I’d basically make sure to get a lot of money if the musical ideas weren’t very much appealing to me, and then use that money to save the world.

( see Timbaland in other ‘sampling news’ over @ Wayne&Wax )