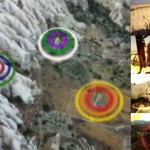 That place in the Turkish desert full of melted rock buildings? That’d be Cappadocia. Was lucky enough to wander around it bug-eyed in 2007, during a stay with Istanbul’s Artificial Eyes. Crazy, enchanting, otherworldly place ( even aside from the “International UFO museum” set inside a cave building ), a desert full of hollowed out mountains – which makes it an amazing environment to explore on foot, or if your birthday happens to fall during a visit to the renowned hot air balloon mecca, from the skies above.

Sometime ( and several DV tapes ) later, was asked to contribute a videoclip to a compilation DVD of Australian artists, to appear in the Synchresis Edition of ANAT’s Filter magazine, being curated by Mitchell Whitelaw ( Canberra based academic, writer and artist with fine blog to boot ). Decided to edit something out of the Cappadocia footage and set about looking for a possible soundtrack. Came across an old track by Extraboy, the more ambient music making alias of Sweden’s Anders Carlsson ( who lived in Melbourne for a while, and graced several Plug N Play events with his live c64 drum sequencer and live vocoded vocals – under his Goto80 alias). Thought the track suited the hot air balloon footage beautifully and thankfully Anders was happy to let the track be used. Turned out also that Anders was playing in ‘nearby’ Israel soon, with the 8BitIsrael.com crew, so we tried for a while to figure out a way he could come via Istanbul, and I could join him as VJ in Israel, an exciting prospect ultimately foiled in a netcafe as the airticket prices doubled over the course of an increasingly frustrating 2 hour netchat trying to find tickets and times to suit. No stopping the Anders juggernaut though, plenty of touring and releases since then, and he included the videoclip below in his mammoth publish-one-song-online-everyday-for-2008 project. 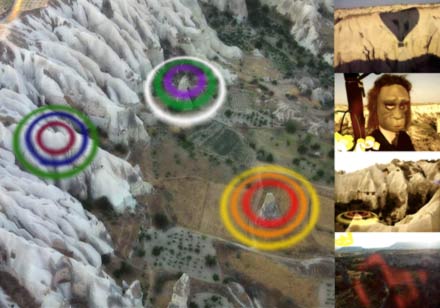