What with her Royal corgi-ness and flocks of steroid-moulded post-humans coming to town, how could this month be anything but spectacular? Highlights of the Melbourne Graffiti Games include ‘Most Elaborate Stencil Piece’, ‘Best Caricature of the Mayor or other City of Melbourne Councillor’ and ‘Most Seditious Piece’. The Stolenwealth Games promise a large gathering of Indigenous peoples from throughout the continent ( the Queen has been welcomed for tea at the campsite. See also the Black GST ), and the Next Wave Festival program is again bumper with gazillions of provocative events, this time the program bump.d with Cape Town collectives, Glasgow galleries and Kiwi co-operatives, to sit alongside all the visiting athletes. Nice looking African hip-hop selection amongst it, and a live re-scoring of Metropolis by Adelaide crew The New Pollutants. 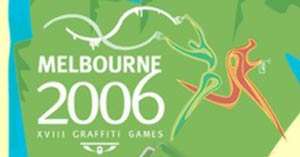