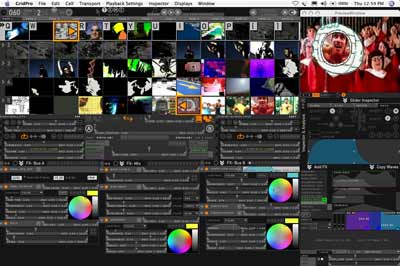 What it is, What. It. Is.
“I just use my muscles as a conversation piece, like someone walking a cheetah down 42nd Street.”

Expanding on the pioneering work of vidvox.net founder Johnny de Kam ( node.net ), Grid Pro is the highly anticipated real-time video triggering, processing and sequencing software that tries to strike a middle ground between ‘Grid’ (simple video sample triggering software) and VDMX (vidvox’s more sophisticated, flexible and process based app). Clips and live camera feeds can be sequenced and processed on the fly, and blended or effected in a myriad of ways. Plenty of on-screen muscle for the sweatiest of pixel work-outs, yet versatile enough to be customised to suit particular needs.

Trigger Fingers
“I have a love interest in every one of my films – a gun.”
– the ‘Terminator’ who recently legislated limits for selling violent computer games in California.

After loading a bank of clips it becomes immediately obvious that Grid Pro can utilise the computer keyboard to trigger from a grid’ of clips, to either a left or right channel for mixing or cutting between. It’s simplicity is the result though of a long development time utilising strong levels of community input, which really shows in the refined ways the program works. For example, clicking on the left side of a thumbnail sends a clip to the left channel, clicking on the right side sends it to the right – a very helpful and visually succinct way of accessing clips. Latency ( clip triggering reaction time) is good and extensive midi support also allows easy midi triggering. As well as clips, or cutting to a live camera feed, shortcuts are also easily created and accessed, for triggering Grid Pro’s huge range of effects and processes.

Processing
“The most difficult decision I’ve made in my entire life…. I made in 1978 when I decided to get a bikini wax.”

Effects in Grid Pro are very elegantly organised and effects variables can be adjusted by mouse movements ( & recorded mouse movements), oscillators and audio or video analysis which can automatically synchronise effects parameters with the sonic or visual dynamics of any sound or video being listened to or played. Both side channels and the main mix channel can be effected separately, and the FX ‘chains’ created can be saved as presets for easy changing to various effects combinations. Grid Pro makes clip processing and variation a snap, and allows unprecedented options for customized real-time adjustment of clips. Most of the FX are high on functionality and low on cheese, and work differently dependent on the order in which they are chained together ( like effects within Adobe After Effects ). The audio analysis is particularly useful, and is easily hooked up to just about any parameter within the program for beat or frequency driven adjustment of your chosen parameter ( eg crossfade time, motion blur, zoom amount etc ). A built-in ‘Font Synth’ enables cycling through text ( or dingbat fonts) with various advanced lay-out and masking options. In short: much pixel grunt, but more stealth ninja than body builder.

Flexibility
“My relationship to power and authority is that I’m all for it. People need somebody to watch over them. Ninety-five percent of the people in the world need to be told what to do and how to behave,”
– current Californian Governor to 33 million people.

Grid Pro ships with a great range of useful and smartly adjustible transitions ( luma-keying, chroma-keying, various blending and wipe modes etc ), allows recording and replay of both clip sequences and overall output, has an excellent customisability (heavily modular structure, easy custom shortcuts), has built-in playback and analysis of mp3 playlists, and even allows for blending of different ways of adjusting clips – eg it allows combining of data such as mouse movement mixed with an oscillator or audio analysis, creating parameter adjustment as smooth or chaotic as preferred.

Interface
“I think that gay marriage should be between a man and a woman.”

This is where it all comes together. Grid Pro shines with it’s extremely well thought out one-screen interface. Interface hierarchies and bottlenecks are kept to a minimum, screenspace is used incredibly well to give access to so many features, and above all – it becomes very intuitive once played with for a while. Real-time video requires an instrument-like interface just as much as it requires brute processing, and Grid Pro probably sets a new benchmark for real-time video interface depth and highly customisable ease of use.

Requirements
â€œAs you know, I don’t need to take any money from anybody,”
– Arnie, before he started funnelling taxpayers money to his favoured business interests.

Verdict
Although the Terminator did defeat Gary Coleman in the Californian election, he reeks a little too much of the 20th century, or perhaps the 19th. In contrast, from within the highly competitive 21st century VJ software world, the release of Grid Pro quickly shuttles them surely to the top or near top of the ‘off the shelf real-time video software’ market. Much is possible with this software.

They’ll be back
Constantly being upgraded and refined, the future Grid Pro pipeline (from near to far away) includes :
– GP 1.1 with a range of minor tweaks, some audio analysis improvements, some new transitions and FX.
– expansion of LFOs ( oscillators ) into ‘behaviours’ with more maths smoothing & gravity like options.
– Integrating the sequencer directly into the media grid, ‘more like zones with patterns and behaviors’
freeframe support
-DV output over Firewire within Grid3
-Exporting of EDL/XML ( editing decision lists – useful for allowing real-time editing later editing on higher resolution footage within linear editing apps such as Final Cut Pro)
-GPU pixel and vertex shader based FX and composition.. on the horizon.