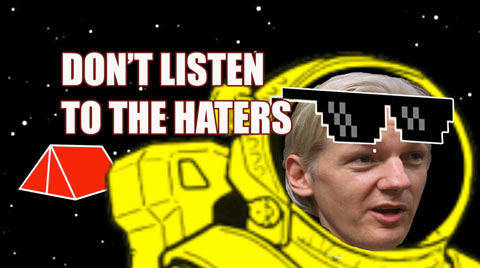 [[Below was my final technology column of the year for 3DWorld magazine in 2010. Only get 400 words or so to play with there, but added a few words and links at the bottom here, that point to some more interesting reading on the info-tech event of the year… ]]

The big technology stories of 2010 arguably revolved around oil and information – the flow of it, the spilling of it, and the abundance of hot air generated by it.

The White House called BP’s Gulf of Mexico spill in April 2010, the ‘worst environmental disaster the US has faced’, and it ended up being the ‘largest accidental marine oil spill in the history of the petroleum industry’. BP’s internal documents were later to reflect the spill was their own fault, and they only had themselves to blame for their own PR moves which included their CEO taking time out to relax at a yacht race during a key time of the repairs. Amongst the many responses to some of BP’s press gaffes, twitter user @BPGlobalPR provided the funniest and often most biting commentaries.

Later in the year, in Cancun, Mexico, we had some small progress towards our increasingly necessary transition to a low-carbon, resource-efficient economy. At the Cancun climate conference, a funding model was approved  that aimed to provide $100 billion a year of funding for developing countries by 2020 to help them green their own economies as well as adapt to the impacts of climate change. A win of sorts. Next meeting, Durban, 2011. Meanwhile:

“A trimaran sailing boat has circled the North Pole in a single summer season (Oct, 2010), a feat made possible by global warming and the melting of the Arctic ice cap.”

“They could plug into your wire whenever they wanted to. You had to live – did live, from habit that became instinct – in the assumption that every sound you made was overheard, and except in darkness, every movement scrutinized.”
– George Orwell, 1984

“Both the American people and nations that censor the internet should understand that our government is committed to helping promote internet freedom.”
– Hillary Clinton, now part of White House moves to try and prosecute Wikileaks in regards to leaked U.S diplomatic cables, some of which suggest Clinton ordered espionage on U.N. members.

“Censorship has also been privatized… litigious billionares and big companies are able to effectively prevent certain things appearing in public..”
– Julian Assange, founder of Wikileaks, which was refused service by PAYPAL, Mastercard, Amazon’s hosting late in 2010.

“We know for sure that one big media company in the US had the ‘Collateral Murder’ video for years and did not release it.”
– Julian Assange

“The aim of Wikileaks is to achieve just reform around the world and do it through the mechanism of transparency.”
– Julian Assange

“Yeah so if you ever need info about anyone at Harvard, just ask. People just submitted it. I don’t know why. They “trust me”. Dumb fucks.”
Mark Zuckerberg, during his early years of Facebook. He was the 2010 Time person of the year. The Time readers poll voted for Assange.

“Every CEO of a social network should be required to use the default privacy settings for all of their accounts on the service.”
– Anil Dash

But What Does It All Mean?
Wikileaks has of course, generated a wealth of debate about its impact and importance. Some of the more interesting pieces to be found:

First up, there’s “State and Terrorist Conspiracies” – an essay written by Julian Assange himself, which attempts to provide a philosophical foundation for Wikileaks. Remarkably, given the amount of international press, it took a blogger to point out the availability of that essay online ( thanks Aaron Bady! / zunguzungu ), and his analysis, ‘To destroy this invisible government’, adds depth to some of the more hyperbolic pro and con arguments being published.

Inevitably, much is being made about the lack of condom / rape allegations surrounding the case in Sweden.  This has extended to ‘raging debate among feminists regarding reaction to Assange’s arrest and its meaning.’ Rape deserves to be treated seriously, and celebrity profiling is easier than exploring the bigger picture, but disproportionate media coverage about these tangents of Wikileaks, given the mountains of revelations also available, in the end does the media a disservice.

Geert Lovink dropped ten theses on wikileaks back in Aug 2010.

Jaron Lanier wrote a lengthy and scathing critique at The Atlantic, ‘the hazards of nerd supremacy‘, which contains much of merit, but then maybe missed the point as well – at least according to Zeynep Tufekci, an assistant Professor of sociology at Baltimore. In her piece, also published at The Atlantic, she claims the real news story is the exposure of internet control mechanisms.

“What the Wikileaks furor shows us is that a dissent tax is emerging on the Internet. As a dissident content provider, you might have to fight your DNS provider. You might need to fund large-scale hosting resources while others can use similar capacity on commercial servers for a few hundred dollars a year. Fund-raising infrastructure that is open to pretty much everyone else, including the KKK, may not be available. This does not mean that Wikileaks cannot get hosted, as it is already well-known and big, but what about smaller, less-famous, less established, less well-off efforts? Will they even get off the ground?”

It’s all a saga that seems tailor made for sci-fi author / computer espionage / hacker Bruce Sterling, but when he finally chipped in with his typical campfire storytellers summation, his descriptions of Julian and likely trajectory of wikileaks, really polarised readers. I thought he encapsulated some ideas and contexts really well, but could see a lot of the commenters on his piece are hungrier for change than Bruce. While it’s hard to predict the spectrum of possible changes Wikileaks might trigger in the coming year(s), this list of news already published by Wikileaks (noted by one of the above commenters), suggests we should be prepared for anything.