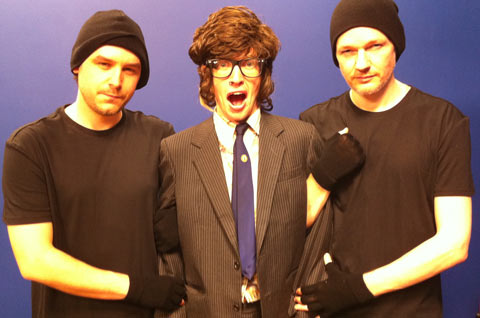 Hugh Farrant and Giordano Nanni uploaded Episode 4 of Rap News to youtube in July 2010, a funny overview of wikileaks and the issues it raised. Their witty editing earned an invitation to meet Julian Assange, resulting in his cameo appearance in Episode 5 (Oct 27), nobody yet aware of the political chaos that would unfold a month later. (Photo above on the day of their video shoot )

How difficult was it to co-ordinate shooting a video with ‘the world’s most wanted man’, Julian Assange?
He managed to fit us in to an extremely hectic schedule. We were pretty sure he’d only have a couple of hours to spare, but at the end of the day’s shoot he told us he’d be happy to come back the next day and re-shoot some of it. Messing around in front of the camera definitely helped get his mind off more serious things for a few hours. He’s a great guy with a wicked sense of humour, and the calmest demeanour of any person we’ve ever seen.

Did you glean any insights about Wikileaks from the contact?
We got to see the project as it was about to enter this current Wiki-Trickle phase. We could tell that they were building up and unleashing progressively larger and more impacting data, but we have to admit that we were blind-sided by this ‘Cable-gate’ phenomenon. I mean, this is a real game-changer. It’s gigantic, and it’s just not stopping.

Given you’ve tallied half a million YouTube views, why refuse their offers of revenue sharing from ads?
We loathe advertising so passionately that the loss of a potential revenue stream is a small price to pay to keep the channel free of marketing. We have a donations system for people to visit, and since episode 5 dropped, plenty of people have been expressing their support with some cash. Donations keep Rap News going, and let us pay for ever more elaborate wigs and make-up.

What do you think of Auto-tune the news?
Seriously talented musicians, extremely funny, and Hugo has something of a man-crush on Michael Gregory. That guy’s got a lot of soul.

What other media inspire with it’s blend of politics and entertainment?
We both enjoyed Starship Troopers – hilarious and kick-ass sci-fi action movie, with some excellent calls about humanity’s interplanetary relations. We love South Park, and Team America is a high point of culture. Koyaanisqtasi – by Godfrey Reggio and Philip Glass – is a film which really inspires and opens one’s eyes to the world we live in. Videos of comedians Bill Hicks and George Carlin definitely taught us a few things. The greatest example of combining entertainment and politics is Jonathan Swift’s masterwork Gulliver’s Travels.

Good news – have we had any lately?
There’s never been a better time in history to be creative with access to a global audience. Wikileaks is excellent news. It was about time things got shaken up a bit. Evo Morales is excellent news for South America. Local band [Me] just signed a UK record deal. Also, Tool are visiting Melbourne in January. Very good news indeed.

Future musical projects for Hugo?
Regular gigs on the North Side. One day – some form of live Rap News format, initially within solo shows and build up from there – a full live touring Rap News musical extravaganza would be amazing. Keep your eyes out for new Branksome film clips, and the sci-fi farcical epic film clip ‘We Are The Humans’.