Pilotless floating killing machines now routinely fly over borders, grim drones of surveillance no doubt predicted by plenty of science fiction before them. The actual 21st century messiness of the drones was best nailed a near decade ago, by Patrick Farley of electricsheepcomix.com. 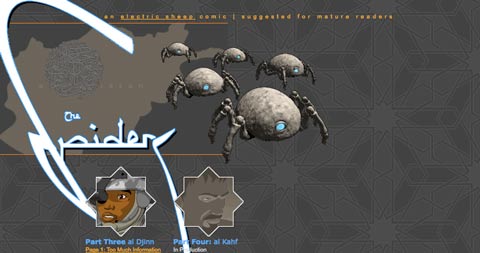 BackTracking
Over at No Fear Of The Future, Chris Nakashima-Brown wrote about watching the Alex Rivera film Sleep Dealer, ‘an amazing work of Mexican cyberpunk about info-maquilas and memories for sale in near-future Tijuana’. He goes on to mention ‘one of the more over-the-top plot elements was a reality television show in which viewers help drone pilots select their terror targets’ – a near identical premise to Patrick Farley’s web comic ‘Spiders’ ( which we’ll get to in a second.. ), and which he presumed as far-fetched – before reading a NY Times report about the Pentagon’s struggle to process ‘the huge quantities of data it is receiving from the proliferating network of Predator/Reaper drones patrolling the skies of the earth’.

You want video data? The U.S. military can give you video data. In 2009 the drones clocked up 200,000 combat flight hours, each generating a constant feed of live video and other data. In 2010, the drones will be able to begin recording video in ten directions at once, 30 directions in 2011 and 65 directions in 2012. Aside from the obvious storage and archiving issues, that also amounts to a serious analysis challenge. How to meaningfully process that much material?

In attempting to prevent an overload of video collected by the drones, the NY Times wrote that the air force and military are ‘turning to the television industry to learn how to quickly share video clips and display a mix of data in ways that make analysis faster and easier’ through a mix of text, live video, replays, and graphical augmentations of the filmed reality.

As Chris saw it, ‘dudes in Department of Defence trailers in Orlando’ aren’t going to be necessarily that effective at analysing the footage from several hundred drones in the air, and suggests a more engaging scenario might be a distributed computing model to fight the war on terror, something along the lines of SETI (where distributed computing power of home computers are used together to help process analysis of signals from space ). As Chris puts it, “allow the private sector to turn the video into the basis of a real-world tactical game, in which teenage boys in suburban Chicago tag the Talis for special attention.” This kinda crowdsourcing was also used in two recent attempts to find missing people ( Jim Gray who went missing off the coast of California, and Steve Fossett whose plane went down in a small region). Making public recently available aerial imagery ( see Google Earth Blog), this was an approach to ‘more rapidly search a large area of imagery using many eyeballs of people around the world’. [ Wikipedia aside : “On May 25, 2007 the U.S. Director of National Intelligence .. authorized .. local, state, and domestic Federal agencies to access imagery from military intelligence satellites and aircraft sensors which can now be used to observe the activities of U.S. citizens. The satellites and aircraft sensors will be able to penetrate cloud cover, detect chemical traces, and identify objects in buildings and “underground bunkers”, and will provide real-time video at much higher resolutions than the still-images produced by programs such as Google Earth.”]

Spiders
www.electricsheepcomix.com/spiders/
In Patrick Farley’s horizontally sprawling webcomic ( screens aren’t pages! ), the drones crawl along the ground. Rather than swooping planes, swarms of insect robots travel over Afghanistan’s desert mountain terrain, each beaming back a video image for spare-time mouse-clickers to watch and report on. Farley’s still unfinished story has plenty of twists, and tries hard to explore what comics on the screen can be, playing often with various technical conventions of the software he knows users will be reading his story with. Unfortunately the whole story isn’t available for viewing at the moment, while he rebuilds his site ( originally hosted at the domain e-sheep.com, but the domain registration lapsed ), but it’s still worth a look see, and there’s plenty of other webcomics and stories to see there too. Bonus Points? His offering of a ‘List of Story Premises’, free for Creative Commons use, noting “If any of these makes you rich, consider buying me lunch.”