While we can enjoy the fruits of being hyperconnected today – we have each other’s reading, listening and viewing habits at our fingertips, we can distribute globally on a whim – what creative performance options exist for real-time collaboration?

Remember ResRocket?
As long ago as 1997 ResRocket was developed by Willy Henshall (Londonbeat), and Tim Bran (Dread zone), as software to allow musicians to jam online, each represented by an avatar, and able to either play along in real time or perfect their part locally and add it to the mix later on – as long as you were playing MIDI instruments or traditional instruments rigged up for MIDI protocol translation. Some 65,000 users later in 2003, it was shut down by the Steinberg company who had bought it earlier. Various ex-rocket members cobbled together http://www.jamwith.us in 2004 which continues extending online jamming software to date. 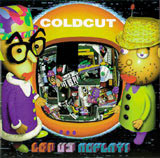 During their Australian tour in May 1999, Cold Cut agreed to perform a netcast from London to the Electrofringe festival in Newcastle Australia in October that year. Through a stroke of luck, the ISP sponsor for the festival had recently bought a warehouse beside the gig venue, and said “netcast? no worries, we can run a fibre optic cable across the carpark into the venue..” Bandwidth sorted ( which delivered us a 100kbs real video stream, luxurious at the time ), Cold Cut suggested doing an online jam at the end of their set with Resrocket. We hooked them up with beatmakers from Elefant Traks, who had been playing with their own online jamming software DASE ( Distributed Audio Sequencer Environment ), and the two groups jammed for a few months beforehand in preparation. On the night the ColdCut stream went fine ( with some of the loudest cheers for the text being written at bottom of screen ), but when it came time to have the jam, the Resrocket studio was inaccessible. The problem? Apparently a participating Resrocket sound engineer in San Francisco had fallen asleep, and the others couldn’t log into the room with the way he’d set it up.

Online Jamming Today?
Compared to Resrocket, the http://www.jamwith.us/ software is more a song production tool than a jamming tool, allowing musicians to synchronize and exchange audio material with most DAW platforms. “It has communication features to simplify the production process and keeps track of your tracks. You don`t need to be online at the same time as files are hosted on servers. The file exchange is optimized by compressing via the lossless flac algorithm.”

http://ninjam.com (Mac OS X and Windows) is a program to allow people to make real music together via the Internet. Every participant can hear every other participant, and tweak their personal mix to his or her liking. Since the inherent latency of the Internet prevents true realtime synchronization of the jam, and playing with latency is weird, NINJAM provides a solution ( as did DASE back in 1999) by making latency much longer. The NINJAM client records and streams synchronized intervals of music between participants. Just as the interval finishes recording, it begins playing on everyone else’s client. So when you play through an interval, you’re playing along with the previous interval of everybody else, and they’re playing along with your previous interval.

Similarly, ejamming.com imposes a delay on your instrument to keep you in sync with other musicians. The amount of delay is bandwidth and distance dependent. The better everyoneâ€™s upload speed and the closer the other players are to you, the lower the delay. The site recommends connecting with musicians close to you so you can adapt to the sync delay, and with their capslock on :
“DO NOT TRY TO CONNECT TO MUSICIANS 5000-10000 KILOMETERS OR MILES AWAY THE FIRST FEW TIMES YOU TRY EJAMMING.” They also recommend headphones to minimize the sound level in the room of your instrument so you can focus on the delayed sound of your own instrument and the sounds of the other players coming over eJamming AUDiiO.

http://networkjamming.com is an Australian developed networked interactive software application aimed at introducing schoolchildren to play in a virtual ensemble and jam with audio and video.

Beyond Midi And Timezone Drift
Open Sound Control (OSC) is a protocol which attempts to transcend the limitations of MIDI, and provide a way of connecting machines more suited to modern networking technology, bringing with it greater interoperability, accuracy, flexibility, and enhanced organization and documentation. Much of today’s audio ( eg audio mulch, reaktor ) and VJ ( eg VDMX ) software is OSC capable, so online jams can include advanced ways of connecting parameters on machines located in different places. More sophisticated patch based software such as max/msp and pure data multiplies these capacities, as exemplified by the likes of Max Neupert’s Video Sampler where remote artists are both able to control an interface and see the other’s simultaneous adjustments, allowing a live remote jamming ( based on both sides having the same local set of media to start off with ).

And aye, haven’t even touched on games, the vastness of online multiplayer games somehow daunts me. I like to think though, there’s a bunch of rastafarian orcs singing acappella tunes together in some hidden corner island of World of Warcraft, a gathering of Grand Theft Auto gangsters making music with avatar gunclicks, and others tweaking out weird audiovisual levels with unreal tournament game engines.

And all kinds of remixing media possibilities have emerged with the widespread adoption of media storage sites online. Using a specific tag such as ‘melb2008digitalfringe’ on media uploaded @ pool.org.au, flickr, blip.tv or vimeo.com allows contributing artists from different locations to remix each others work during performances ( see below). Most media storage sites also tend to feature RSS feeds of media that can be subscribed to and utilised within software, and API‘s ( programmer friendly code which provides database access to media for custom uses ).

In the Digital Fringe leg of the Melbourne 2008 Fringe Festival, Plug N Play Melbourne, and Share Outpost will be hosting an event simultaneously with others in Brisbane, Perth, Tokyo and New York, where we’ll be trying to milk some of the collaborative possibilities, and trying to provide some introductory way of linking our events. Aside from a range of performances that night @ Horse Bazaar, we’ll be using the streaming software at mogulus.com/netlag, to select feeds from the other cities at various times, and to send an overall mix out to the web and to those at other events. The mogulus software allows live chatting via web, and anyone watching can also send twitter messages from their phone or web to twitter.com/netlag and these will scroll across the bottom of the netcast.

The Mobile Projection Unit will be wandering around Melbourne projecting some of this, and also beaming back to the venue, and web, camera views of these projections. Crazy kinds of feedback loops possible to play with there – artists painting walls in NY say, being beamed through mogulus to our event, we select their feed and send to the mobile van, to project their art onto walls around Melbourne, video camera sends footage of this back to us, and back to the web, where the artists in NY can see how their work is being recontextualised in Melbourne, and adapt to it. The mogulus software is pretty good too, for allowing easing cueing and transitioning from feed to feed, so each member can send a feed to the web from their location, and the admin user can easily select which feed becomes the main feed. Should be fun at least, to cut in snippets from elsewhere, to our event in Melbourne, and hopefully fun for others to receive some of ours. And fun to see what kind of remixes emerge from the tagged media everyone has access to.

In the end, just an experiment at linking events, but will be interesting to see where it goes… ( esp with the end of travel being predicted and all.. )