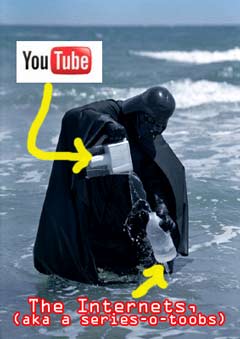 With over 200 video uploading sites available, including plenty offering better resolution ( eg vimeo.com ), better interfaces ( eg veoh.com ), better payment for people whose clips have been viewed ( eg blip.tv ), the ability to stream live video from your phone to the web ( qik.tv ), and even a capacity to remix files via a browser when uploaded ( eg jumpcut.com ), there’s lots of reasons to avoid youtube. And yet.

Despite it’s crappy resolution, and significant other failings, youtube has become something of an extended audiovisual memorybank. Childhood television rarities, esoteric film snippets, weird slices of history, all viewable in our own time, not when (or what) the networks schedule. Sample clips bookmarked recently at youtube.com/user/jeanpoole :

– Darth Vader edited to be shown removing his helmet to play a harmonica for a disturbed Luke Skywalker, and elsewhere having his voice overdubbed by the brutal Daniel Day Lewis character in There Will Be Blood.. ( maps surprisingly effectively ).
– Saudi Arabian guys on a freeway, holding onto their doors and kind of ice-skating on the ground as the car speeds along…
– Astronaut Buzz Aldrin punching a conspiracy theorist reporter in the face who keeps inferring humans have never been on the moon..
– Turkish E.T.
– La Jetee ( Chris Marker’s legendary sixties short film which regularly finds itself on best film-ever lists )
– William Shatner at a scif-fi awards night singing about the the problems of being a rocketman, being high as a kite up there and all.. complete with deliciously cheesy 70’s styled re-composited versions of himself.
– Footage of the last Tasmanian tiger.. which died in Hobart zoo in the 1930s… the last sighted specimen, it’s tragedy compounded by dying from a human error – a zoo attendant forgetting to put it indoors overnight during one night in the Tassie winter. ( Reviving the tasmanian tiger from a museum DNA sample has been the subject of much scientific work, recently getting a boost when scientists managed to resurrect the gene responsible for the development of cartilage and bone by expressing it within a mouse embryo, but stating that the full reincarnation of a full tassie tiger was a long way off. )
– Still undecided on the merits of his recent epic, Inland Empire? Try this David Lynch double-bill instead :
1 – David Lynch eating panties.
2 – David Lynch deflating Tom Cruise’s Scientology bubble.