Visualist and 3D animator Josh Cardenas gigged 6 times in 7 days for the recent ‘Hard Sell’ tour with DJ Shadow + Cut Chemist, yet still had enough pixel gadget stamina to hook-up later with VJs in most cities too. And so.. 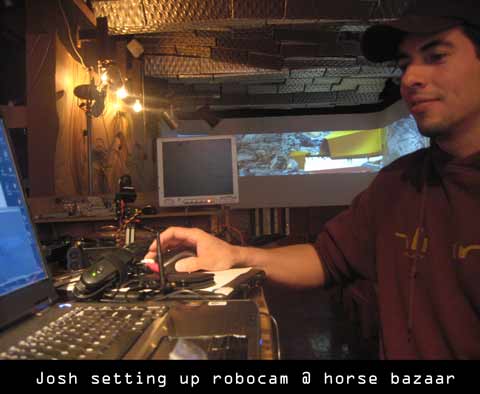 What Went Through The Customs X-Ray Machine
2 x Edirol V4 video mixers,
1 x Pioneer SVM-1000 AV mixer for final mixing – “It was cool cause it handled both video and audio – as we had some pre-recorded animated ‘intro’ to the show that had a voice over track. With the mixer I could control the audio levels from my feed. Also, it had a nifty touch-screen to add some super effects! i used this a bit, but sparingly as they are pretty heavy handed. = ))”
2 x DVDJs ( VJs can scratch too )
Laptops ( Who’d have thought?)
Midi controllers.
Cable spaghetti, and inevitable sprawl of AV and international power adaptors.
Portable Battery the Size-Of-A-Laptop which supplies 8 hours of power.
Various tools and tech problem-solvers.

Oh – and 4 x ‘robocams’ which could be remotely controlled by midi, for panning and tilting on the dual DJ action, 1x DJ wristcam for the trainspotters and 2 x cams on mic stands. 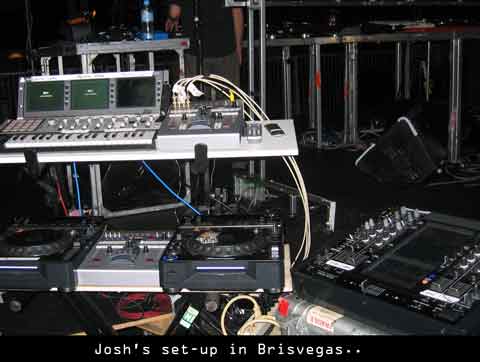 Getting It Together
Josh met up with a few Melbourne visualists at Horse Bazaar, where we showed him the resident panoramic screen and the Dataton Watchout software which stitches together the 6 screen wide panoramics, and then he whipped out one of the robots for us ( after cycling through a range of power adaptors before settling on his ‘back-up’ 8 hours of power Size-Of-A-Laptop battery… ). Soon enough, with impressively fluid arcs of movement, the camera was swooping around via controls on the computer. Josh built the hardware himself, mounting each cam on some movable parts ( see MAKE / createdigitalmotion / instructables etc for DIY midi, motors + electronics ), then connecting that up with some patch based software ( eg VVVV, processing / max-msp / quartz composer ) which allows midi signals to control the movements.

Once the software was launched, camera movement was a simple task, gliding the mouse this way or that way to swing the camera’s focus around the room. More impressively, software based control also allows a range of audio analysis or sine wave oscillators to steer the camera movement – eg letting the bass levels control the tilt of the camera, or setting an oscillator to swing the pan back and forth at a preferred speed or frequency. Save a few of these movements as presets, map these to be triggered a midi controller, multiply by 9 cameras, and Dr.Versatile is in.the.house. Kinda handy when VJing for highly improvisational DJs. Josh showed the setlist which featured extensive cues where he was supposed to trigger various video clips, but said inevitably the shows were different each night as the DJs extended out various sections on a whim, keeping Josh on his toes at all times. And with his 3D background, Josh has plenty of ideas for spatial exploration with camera rigs, expect to hear more in the future. 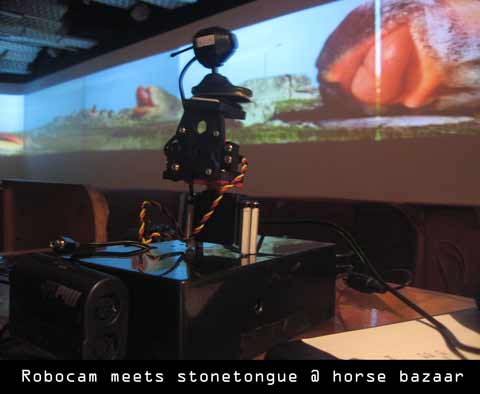 Hollywood Bowling
For those who missed the show, it’s already a disc on the shelf of indie DVD distributors, microcinema.com. Whereas the “Freeze” and “Product Placement” shows were also recorded for DVD, the Bowl setting inspired a less spartan treatment for this disc – with a full behind-the-scenes story of how the show came to be, the live performance, visuals, a gazillion camera angles, more interviews and a 40-page booklet.

(( + hat-tip to Jaymis from CDM + Plug N Play Brisbane for hooking up Josh with the Melb video peeps.. anddddd UPDATE: vidi-yo interview just posted by Jaymis over at the CDM Brisvegas ranch))