[[[ Turns out I’ve been doing 3DWorld‘s Technoscape column for around 10 years (and 5-6 patient editors). Below, my very last column for them, after they recently announced they were shutting down. Weirdly, this comes just as 3DWorld seemed to be getting a roll on, boasting a new smaller magazine format, hitting more cities, and starting to sculpt the overall content better.

The downturn in advertising revenue was blamed variously on the GFC, a downturn in clubbing and an increasing shift by promoters to the internet. It was often weird writing a very net focussed column for a weekly print mag, but never more so than this week. And it has certainly been an eventful decade for a column about media technologies. ]]]

1998: Remember when that new search engine came out, promising better results with it’s algorithmic interrogation of linked relationships online? That was Google, in its PRE-VERB DAYS. Paypal launched that year too.

While I’d like to be able to say I was writing Technoscape since BEFORE GOOGLE EXISTED, I don’t think that was quite the case. 3D World on the other hand, goes back further, splashing it’s first club culture ink in 1989, before Facebook, before MySpace, before Youtube, before Google, BEFORE THE FIRST WEB BROWSER in 1993. Imagine – a time before the web even existed, and there were so many people dancing in dusty warehouses, that they needed their own magazine. In a time BEFORE STATUS UPDATES.

That loose timeline also shows we have no clue about what yet-to-be-invented internet services we’ll likely heavily rely on in only a few years time, and serves as validation for the ‘future proofing’ strategy of installing high bandwidth fibre optic under the NBN scheme. Less validating? Australia’s proposed net filter.

In 2001 some new fledgling software called Ableton Live was born in Berlin. You might’ve been using Photoshop 6.0, Final Cut Pro 3, After Effects 5.0, Cubase VST32 5.1, Pro Tools 5.0, Rebirth(!), Arkaos, VDMX and so on. And today, are we really much better, faster, stronger? A few quick keywords show how our tools and processes and possibilities have evolved: kinect hacks / serato bridge / maxforlive / processing / vvvv / syphon recorder / madmapper / quartz composer / touchOSC. More sophisticated, yepz, but arguably not much different.

3DWorld, it has been a fucking pleasure. Stay in touch via skynoise.net or twitter. I can’t believe this is the very last Technoscape sentence, and it is now exactly 400 words. 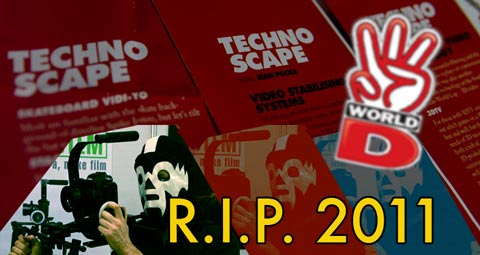