With the current rash of comics being turned into films, it’s probably a good time to remember there’s a fine array of Australian indie comic makers with a truckful of published inked pages between them. The Tango Collection, an anthology loosely themed around romance and edited by Bernard Caleo is the latest attempt to gather some of these in one place.

“If comics had a muse, she’d have crooked teeth and freckles and wear thick black-rimmed glases and old fraying cardigans, sensible shoes and embarrassing shirts her mother chose. She’d also have deep-green eyes and piercings galore, a hidden tattoo, a deliciously dirty laugh.”

Dylan Horrocks in the foreword to The Tango Collection.

And while the above description of a muse may or may not work for you, it has to be said The Tango Collection delivers when it comes to offering rawness of spirit, ideas and execution. It’s a passionate affair, featuring over 50 comic creators from Australia and New Zealand. 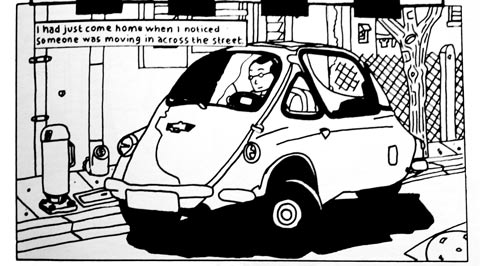 Highlights?
With such a diverse bunch, favourites are always going to vary, but these are mine:
Mandy Ord’s distinctive stylings always stand out, Pigeon Man…(up top, rats with wings! ) and ‘A Good Provider’ both deliver.
Gregory MacKay’s meditation on vintage aesthetics is really well timed and crafted.
Michael Camilleri’s mini-creature humans (see below), Andrew Fulton’s parent-son wrestling, Michael Fikaris’ food thoughts and Tim Molloy’s Shining Silver Path all manage to explore visual cuteness in interesting ways.
Glenn Smith + Gina Monaco take that a step further, gushing about sausage sandwiches at Bunnings and never eating sushi without each other. ( Apparently, they’s in lurvvvve )
Tim Danko brings some typically avant layerings from NZ… pondering about Melbourne as the world’s most livable city.
and Bruce Mutard’s internal food critic is well evoked in an exploration on the difficulty of eating ethically these days.

It’s an eclectic collection, though a few too many of the comics had visual styles or techniques that felt unpolished. That’ll vary depending on personal taste, and given the range, it’s a book well worth looking at. ( Out now through allenandunwin.com ) 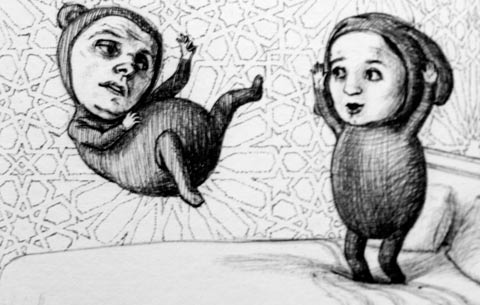