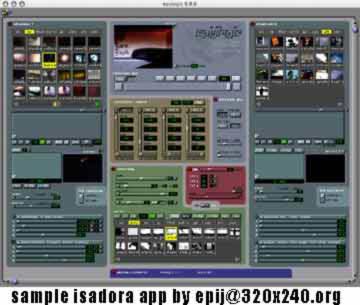 Female cane-toads can lay up to 10,000 eggs a year, and as an introduced pest, are rampantly out-hopping many of Australia’s East coast native animals. While real-time video software isn’t breeding at quite that rate, almost daily developments in the field bring with them new strategies for survival in today’s multi-platform, multi-protocol, soft&hard-ware vidi-yo environments. A particularly adaptible addition to the real-time video application list is Isadora ( mac & soon PC ), made by Mark Coniglio of the Troikatronix dance choreography group ( NY).

Adaptations
Honed from a decade of experience working with live video and dance isadoraweb.jpgperformer’s, Isadora is a ‘graphic programming environment’ for interactively controlling digital video in real-time. While those familiar with ‘patch-based’ software such as Max/MXP & Jitter, Nato & Pure Data will easily understand the Isadora framework, it takes a bit of work for the rest of us to understand the way it’s components can be connected and utilised to create customised video applications. With a little mental grease expended though, Isadora can then offer a vast array of possibilities for controlling live video – with the keyboard, external controllers or triggering devices, or even by dancers or video analysed movements.

How It Works
On the Isadora ranch, things be modular. That is, it contains over one hundred basic building blocks such as video FX, number generators for oscillating values, outputting to screen or recording to disk, midi controllers, sequencing environments, sound frequency analysis etc. It calls these blocks/ modules ‘actors’, and keeps them in a ‘toolbox’ in a panel on the left. Each ‘actor’ can dragged from the ‘toolbox’ into a ‘scene editor’ ( a large window in the middle ) and sequenced and connected with other ‘actors’. A ‘scene list’ at the bottom of the screen allows the user to move from ‘scene’ to ‘scene’ or switch between their arrangements of ‘actors’. Linking the video output of a ‘scene’ to the video projector ‘actor’ will show the end result on a small window called the ‘stage’, as well as outputting that to a projector. With these basic principles however, very complex and sophisticated processes and interfaces can be built, allowing very refined mouse keyboard or midi control of digital media files with customisable effects.

For those who would be challenged by it, Isadora comes with a very comprehensive 200 page pdf manual, which helps you set up your preferences correctly for your system, integrate midi interfaces, investigate the power of various modules and how they might be connected, and read about related principles for controlling digital media in real-time. A decent amount of help information is also embedded throughout the program, and the very responsive community of Isadora users is always on hand to diagnose or offer suggestions for each other’s software creations.

Chameleonics
Some of the different ways Isadora can be used then, include :
-Dance performances ( dancers can interactively manipulate sound and video in real time)
– Interactive Installations ( extensive MIDI input and output control, video tracking of an object’s position within a frame, audio analysis )
– Post-Production FX
– VeeJayism ( create your own interface, quick selection of clips by thumbnail, switching various complex processes on and off to minimise computer overload )

Verdict
Wonderful and well executed addition to the real-time video software field, and a great example of bridging the gap between artists and programmers. Versatile as you the time you put into it, and offers both an intuitive interface and progressive depth.