Pixel-hungry Serato turntablists have a new tool in their arsenal, Mix Emergency, available from inklen.com/mixemergency.

What It Is, What It Is
If my mum asked me, I’d say – DJs got tired of carrying milk crates full of records around, and started storing all their music on laptops. So instead of choosing records, now they can just pick a track on their laptop, and a special device let’s them pretend the record on the turntable has that track on it, letting them move their hands about and scratch it or jump to different places, and the device and the laptop take care of playing that music out of the speakers. Mix Emergency lets DJs use video files as well, so as well as music going to the speakers, video goes out to a projector, but the speed and timing of it is controlled by the DJ’s hands.

In other words, mix and scratch video and visualisations ( it’ll handle your quirky quartz composer patches) in real-time, if you’re already using Serato Scratch Live. Mix Emergency doesn’t handle any audio itself, but as it runs grand in conjunction with Scratch Live, that’s fine. 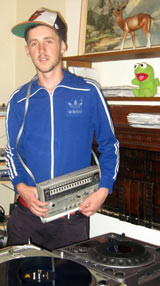 From my video library, Lewis made a special request for that ‘Little Superstar‘ clip doing the rounds a while back, of a tiny grinning Indian boy bodypopping like an electrified midget James Brown, freezing whenever his dad pressed stop on their portable ghetto blaster. Lewis then exported* the audio so it was a standalone track, lined this up in Scratch Live and sync-ed this to the video file in Mix Emergency, and began scratching back and forth, the hip-hop track coming out through the speakers and the video clip through video output onto a TV.

Cue points are easily inserted in Scratch Live, so next Lewis was jumping back and forth to various key points on the clip ( the grin, the grin! ), and scratching along the way. Mix Emergency seemed to keep the video locked solidly to the audio and kept pumping out frame-steady pixels, no matter how motion blurry Mr. Cancut’s hands seemed to get. Double thumbs up. This is what we’ll be doing with it below :

– Recording and exporting of performances in a non-CPU intensive way ( ie presumably records your actions, and then later takes longer to analyse these and export your video without dropping frames. )

– Decent range of transitions between channels

– Overall controls of the master output – eg fade to black / white, adjust contrast, colour etc – to help the scratch DJ optimise the output for whatever projector / screen / environment they’re using. Being able to add master effects ( not just on either channel ) would be good too.

( MixEmergency will run on both PowerPC and Intel CPUs. However, low powered CPUs, such as those used in the PowerBook G4, are not officially supported for video mixing and scratching. Low-quality (320 by 240) videos and simple Quartz Compositions are recommended for such systems. Download and install the demo to test on your system. )

Also needed : $179 USD ( Possibly the equivalent of a small Australian home by time of publishing )

A great addition to the live visual performance software market, look forward to its future iterations.