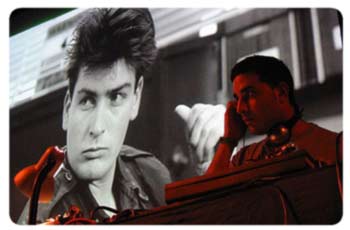 Self-confessed short attention spanner, Londonite Duncan Beiny AKA DJ Yoda is gathering momentum with take on hip hop spliced with pop culture and bad taste. Fond of mixing Neighbours dialogue with Wu Tang beats, he has taken to upping his cut and paste antics with the addition of DVD scratchnology in his live show. With a couple of CDs & DVDs now under his belt, he makes his way to oz in February 07.

What are you still proud of with your debut album?
I think I under-estimated how easy it would be to make an artist album â€“ Iâ€™m pretty used to working on mixtapes, and I thought it would be that simple. So I guess Iâ€™m proud that I got it finished finally, and that itâ€™s at a stage that Iâ€™m happy with! Also, that I got the chance to make two tracks with Biz Markie, whoâ€™s always been my favourite MC.

How has your development of an audiovisual show shaped your music creation process?
Actually I donâ€™t think the DVD mixing that Iâ€™ve been doing has affected the way I make music â€“ if anything itâ€™s the other way round.

What gear do you use for a live show?
Pioneer DVJs, Pioneer DJM mixers, turntables and Serato.

And in the studio?
Anything thatâ€™s available. I have access to a very cool studio with about 200 keyboards and every drum machine you can imagine, so whatever takes my fancy! And kazoos.

What are your general steps now, when approaching a new audiovisual show?
Well my newest tour is the live show for my album, so Iâ€™ve got together visuals for each of the tracks on the CD, and will be mixing it all up together, and creating live bootlegs of my own tracks. So Iâ€™ve filmed a lot of the rappers on the album performing their track, and I can mix them into different backgrounds and stuff. Itâ€™s very cool.

What sort of differences exist for the way samples are treated by copyright holders of audio and video?
Clearing video is pretty much impossible! I looked into doing a legal mix DVD, and it basically canâ€™t be done yet! There needs to be some serious re-examination of the way copyright laws work for video and audio I think.

Did you have to get samples cleared to produce your Kill Bill DVD set?
( Have you ever had any sample clearance troubles with anything? )
Can I just say â€œno commentâ€?!

What happened at the turntable & orchestra event ?
It was a really incredible experience â€“ just because it was so different from anything else Iâ€™ve ever done. I had a music score on a stand to follow, and I had to watch the conductor, and the rest of the orchestra, so it was crazy. The crowd was half Yoda fans and half classical music aficionados, so that was weird. But it was queues round the block, and standing ovations, so what more could we have asked for! The concerto is going to be recorded and released next year, and Iâ€™m sure weâ€™ll take that on tour too.

What’s good and bad about DVD mixing technology?
Good: it adds an extra element to the DJ/club experience, and allows me as a DJ to have that extra element of creativity .
Bad: more equipment means more electricity â€“ bad for the environment.

Audiovisual inspirations? Who has pushed it?
Itâ€™s weird â€“ I have so many inspirations when it comes to music, but with the AV stuff I donâ€™t really feel like Iâ€™m looking up to anyone. Thereâ€™s no-one that Iâ€™m aware of thatâ€™s out there doing what I do, so I think Iâ€™m an old-school innovator at this!

Where does yoda want to take the force next?
Iâ€™m going to start working on some more music production for other artists, and then on a new â€œCut and Pasteâ€ CDâ€¦

Can we expect the full audiovisual show when you come to Australia?
You can â€“ Iâ€™ll have the full dates up on www.djyoda.co.uk in the next few weeks, but Iâ€™ll be all over Oz in February! See you there!