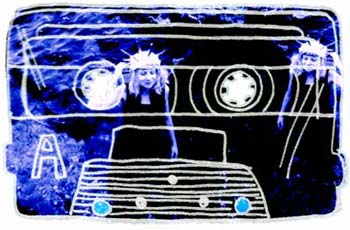 Threaded amongst the various art projects of New Yorker Alyce Santoro, is a deep(sea) fascination with the interplay of sound, technology and nature. Where these interests meet especially well, and where she one-ups her conceptual cousins, notorious UK collage artists >> CassetteBoy, is her project Sonic Fabric which makes clothes from textiles woven out of recycled audio cassette tape. Which you can play out loud. And she does, by running an exposed tape head over her clothes / fabrics / textiles.

– What drew you to ‘Sonic Fabrics’?
Originally, the idea came from tell-tails (wind indicators) made from little strands of cassette tape sometimes used on sailboats. Audio tape is light and durable and sensitive to the wind, so it makes a good tell-tail. I started racing small boats when I was 10. At the time, I used to imagine I could hear sound wafting out onto breeze on a windy day.

Years later, I learned about Tibetan prayer flags… they are small squares of fabric that have mantras silkscreened on them… the idea is that they’re hung in locations where the wind blowing through them can “activate” the blessings, sending them out around the world. This reminded me of the tell-tails, and I thought, wouldn’t it be great if the sound was actually inherent in the fabric…

And so I started collecting tapes, and knitting, and crocheting, and weaving with them. Took a while before I hit upon “sonic fabric” in its current form.

– What do you enjoy about how your cassette tape clothes sound?
Actually, the sound itself isn’t so important to me. for me, the important part is just knowing that i’m literally weaving together and wearing my favorite sounds. The garments are somewhat ceremonial, like what a shaman or superhero might wear on a particular occasion.

-What are they like to wear in everyday public situations?
No one would ever know that the garments were made of tape unless you told them, or you had a little reader device (they’re easy to make from an old walkman) on hand and could demonstrate. Most people really can’t believe it when you tell them. They have to hear it to believe it : ). It’s actually quite comfortable to wear…like a thin, breathable, slightly plasticy denim.

-Your cassette fabric looks somewhat like sheets of seaweed. When can we expect sushi tunes, and what would they sound like?
Sheets of seaweed, ehh? I’m not surprised..I was a marine biologist before I became an artist, so I have a feeling the ocean is pretty much part of everything I make. The sound the fabric emits is very underwater like, in fact…

-What other fashion / technology intersections have intrigued lately?
Honestly, I’m not so much into fashion as I am into recycling. anything that reuses or revamps something old turns me on. I have a bag made by Carrie Collins out of old car upholstery and a safety belt. This i love. Rescuing stuff from landfills.

To me, technology is a metaphor for what we can do with the untapped portions of our brains. As a species, we long to connect. So we invent things…telephones, televisions, the internet…that get us closer and closer to the goal. If there’s some kind of fashion that eludes to that, or facilitates that, I’m into it. Much moreso if it can be made from something recycled.

– How *is* the ‘Center for the Obvious Campaign to Replace the Dial-tone with OM’ going?
Well, it was going great back in the day when there were actually dial tones around!! That “campaign” started in 1998. the idea was that, if you listened carefully, maybe the dial-tone already WAS om, maybe it had been om all along, and it’s all just a matter of perception. I learned once that Laurie Anderson used to tune her violin to the dial tone.

– And your ‘silence dress’? A reaction to working with sound?
Sound…vibration…is the essence of everything. without it there would be nothing. the silence dress has a patch on it that pays homage to the opposite of sound. ultimate emptiness.

And DIY? From the Sonic Fabric FAQ >>

“How can I make my own Sonic Fabric listening device?
It’s quite simple, actually. Just take an old tape walkman, unscrew the head and remount it on the outside of the plastic housing using silicone. Plug in the headphones, turn the volume all the way up, and press PLAY. Now run the head over the fabric. Works best if you drag it along in the same direction as the tape (as opposed to running it along the warp, which is cotton or polyester). Try it at various speeds and see what happens. “

Update: Via Make blog, where this interview got mentioned, a reader noted Nam June Paik did a piece like this in 1963 called Random Access.