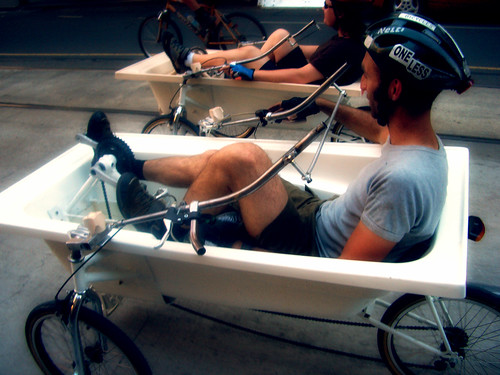 Aye, even Einstein recognised ze beauty, ze efficiency of ze humble spoked two wheeler, ze human powered transporter, ze deadly treadly, ze bicycle. City riding can be tricky though, a fact countered each month by the International carnival of bikes that is Critical Mass ( see www.criticalmass.org.au for a list of Aussie meeting points, byo musical instruments ). Another champion of the cycling underdog in the city is the bunnyhopper behind Melbourne’s urbanbicyclist.org, a site full of street-savvy bike riding tips.

What inspired your Urban Bicyclist Project?
All the amazing people who use their bikes every day for transport and living. Every day, at all hours, in all parts of the city there’s a breed or cyclist separate to the more official professional bicycle world – a world that tells us to ride on bike paths, wear our helmets, buy more stuff, dress funny and don’t worry because it’s all being taken care of. Go into a bike shop and the only cyclists you see are lycra clad professionals or bike path bound weekenders. When it comes to support or acknowledgement for “urban” cyclists who ride for transport, not just fitness, sport or recreation, there’s little information support or advice.

The city rider guide started with a few small tips on avoiding car doors. There was a real need for some sort of official campaign to tell car drivers to watch out. In Europe you’re taught to open your car door with your opposite arm which forces you to turn and look. In San Francisco, and New Zealand the Department of Transportation produces stickers which go on rear vision mirrors as reminders. But in Melbourne we just got campaigns targeted at ensuring cyclists wore their helmets and bright clothes.

But a campaign targeted at drivers was beyond the capabilities of the urbanbicyclist project to address. We thought it was smarter to empower cyclists with the skills and information to better handle themselves. It’s also much easier to reach the right kind of cyclists by leaving notes on bikes parked on the street. The tips and tricks grew into riding at night, riding in the wet and other traffic tips, and the guide became fridge worthy (or back of the toilet door material).

Critical Mass also inspired the urbanbicyclist project, as one of the very few things that street cyclists have as a playground for their ideas. Bicycling organisations have been conservatised by their size and wanting to please everyone all the time.

What kind of effect do you think the monthly Critical Mass bike rides have?
Critical Mass rides have a reinforcing, re-energising effect on its riders and are a breeding ground for urban activists. I can personally name dozens of people who are active in the transport planning community, an interest initially sparked by their involvement in Critical mass. There’s also an emerging breed of engineers, planners and other professionals entering federal, state and local government working towards reducing the role of the car in our society. On a broader level, car drivers also notice Critical mass and even the mainstream media has registered the Critical mass rides that have travelled onto Melbourne’s privately owned CityLink tollway.

Memorable Critical Mass moments?
So many – from the epic bridge and tunnel rides, to the sublime winter rides weaving through the back streets of Carlton.

We’ve inherited cities based on car-transport, how can we improve that?
That’s not necessarily true, we’ve lived in cities for thousands of years, we’ve had cars for a hundred. Cities are a reflection of the society that inhabits them. Streets are amazing places, public spaces are the lowest common denominator, the mixing place where people interact with each other. If we start to remove car traffic from our streets, they instantly come to life, the built form of our city responds to our changing behaviour as much as it influences it.

Inspiring examples of urbanised transport solutions / projects in cities around the world?
The most creative solutions to problems, in my humble opinion, come about when people work together. When the bicycle planners are activists who now work for city hall, where the mayor catches public transport to work or where the police know that riding bicycles makes sense. Breaking down barriers that we unnecessarily build around ourselves is the key to improving our cities which are essentially the spaces we live in.

Tips 4 new cyclists in the city?
Explore the city! There’s always 3 ways to get everywhere, sneaky back street shortcuts are so plentiful. Get a map of the city and investigate alternative routes. Don’t let the wet weather hold you back – a normal visor on your helmet can help to keep rain off your face and clear glasses can keep rain out of your eyes, mud guards can help keed road grime off yourself, and a bit of planning with a change of clothes (or just a change of socks) can make a big difference on the way out. Get a copy of the ‘city rider guide’.

Last time you had car envy?
Cars are beautiful because there is an entire culture founded on making them look good, cars are comfy because they couches in them and I like sitting on couches. But as soon as you take a step back and think outside the car, it really puts things into perspective and brings you back to earth.

What’s the largest animal you’d be able to bunny-hop over?
Bunny hopping is so damn useful, and there are kids in the city who can jump a metre or more over steps and onto ledges. I can do cats and dogs, but try and ride around animals that may be too big.