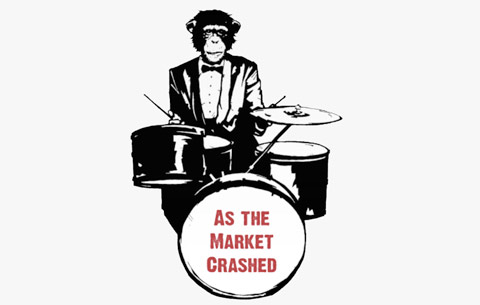 Chimps are now making movies. It’s true. And their movies are getting screened on the BBC. A bunch of chimps were given access to specially designed chimp-proof cameras as part of a scientific study into how chimpanzees perceive the world and each other, and could also use some touchscreens that allowed them to view remote parts of their enclosure. This was all part of a natural history documentary, and the relevant chimp clips were shown as part of the program Chimpcam on BBC 2.

When Chimps Make Noise
Am eternally indebted to Jim Knox ( I Flips Me Lid ) for casually pointing out that the makers of the Get Smart sitcom also made Lancelot Link, a 24 episode detective series with a cast entirely comprised of chimps. Which isn’t to say they held back on the storyboarding. As well as car driving chase scenes, there were water skiing chases, camel rides in the desert with falcons on shoulder, chimps dressed as undercover surgeons performing surgery – and so on. And then some. Complete with musical interludes to break up the show, with magic trick performing MCs introducing the ‘live band’, of instrument wielding chimps, bashing along in time to some sixties psychedelic sitcom rock. ( More on that here ) The chimp band’s name? ‘The Evolution Revolution’.

Inside The Chimp Mind
Radio Lab at WNYC produce an excellent weeklyish radio show and podcast, where on given themes, they carefully craft together a show using a range of interviews, sounds effects and themselves making provocative jabs at each other. That the end result comes off as so freewheeling and conversational is testament to their editing skills, but anyways – a recent show was about the Animal Mind and they asked whether it was possible for one animal to know what is going on in another animal’s mind, and looked at the problems of anthropomorphising too much (Said one animal scientist : Expecting that every other creature perceives the world as humans do, vastly reduces the complexity and diversity if the world ). Can we really see inside a chimp mind? Or they, ours? What type of communication is really possible? The one hour show is worth listening to for the interesting scientist perspectives, but it’s the tale involving a large, floating whale eyeball that did it for me.

No Chimpee, No Cry 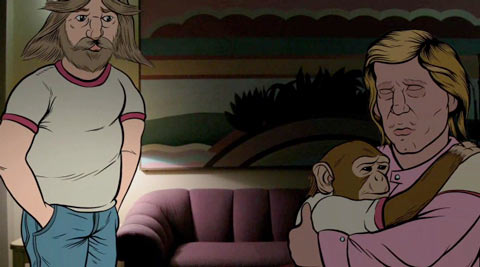 Carson Mell is “an artist/filmmaker living in Hollywood, CA without a wife or an animal”. It said so on the internet : vimeo.com/user520733. Animal owner or not, Carson makes great short films, as featured on the also wonderful Wholphin DVD compilation ( from McSweeneys ), and it’d seem from the sprawling animated carcass of his short about an aging touring rocker, Chonto, Carson and animals, they have a special relationship. Get your Chonto fix at vimeo, or over at http://www.carsonmell.com. (Or aye, full-length atyou-toob )

Chimp Shout-Outs
It’d be appropriate here to mention, Soda Jerk’s The Dawn of Remix which features a wonderful scratch video section using the apes from Kubrick’s 2001 to great effect. Soda Jerk? Those Sydney cine-remixers behind the likes of Picnic at Wolf Creek, Pixel Pirate II. They spend a residency in India recently, so future work may have a Bollywood tinge, and they’re currently working on ‘The Dark Matter Cycle’ of videos, exploring the intersection of death, temporality and cinema. “Go(o)d times”.

And Then There Were None
Did you know there are as little as 21,000 chimpanzees and 25,000 gorillas floating about? As it turns out – around ‘1.2 million years ago, only 18,500 early humans were breeding on the planet- evidence that there was a real risk of extinction for our early ancestors, according to a new study‘. We’ve managed to rise to 6.8 billion now. Is is possible there’ll be more chimps than then in another 1.2 million years? Not at our current rates of deforestation. If there is however, what will the future chimps think of the ANIMATED series, Return to Planet of the Apes?