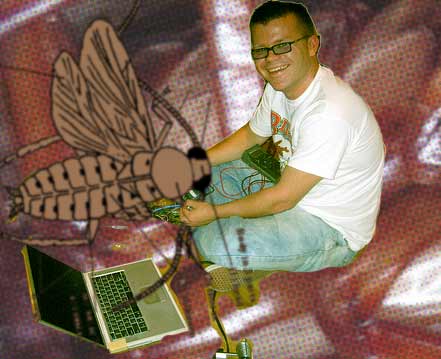 At the University of California Irvine, 1x Garnet Hertz is ploughing his way through a Visual Studies PhD program, with a particular focus on “the quest for living machines”. Aside from exhibiting a dead frog with a miniature web server embedded in it ( allowing web visitors to re-animate it’s limbs! ), this quest has more recently lead him to using a living roach atop a modified trackball to control a 3 wheeled robot, infra-red sensors providing navigation feedback to the cockroach, with the hope of creating a pseudo-intelligent system with the cockroach as CPU! Visit www.conceptlab.com for much more info, knowing you’ll be in fine company ( one of Arnold Schwarzenegger’s close aides was given a demo recently).

>>What attracts you to artificial intelligence?
It’s more of a repulsion than an attraction. The proponents of “strong” AI like Kurzweil that believe that machines will (or already are) literally intelligent makes me laugh. Strong AI is a joke: it’s a re-hashing of the age-old desire to endow inanimate technology with life. Yesterday it was idols made of stone: today it’s silicon.

“Soft” AI: that machines can solve difficult problems as expert systems is a slightly different matter, though. MapQuest wayfinding and other similar technologies are quite amazing computer programs. I may be off the mark here, but I think it’s an anthropomorphic stretch to think of these systems in the same breath as carbon-based lifeforms.

AI is a catch-phrase that many undergraduate (and graduate) students in computer science fling out to their parents to try to impress them when asked “What do you want to study?”. In my estimations, few of these students have a clear understanding about the field of AI – other than it’s a holy grail and that they’re wanting to join the priestly caste to pursue it.

>>How has the AI concept morphed over time, and do you still find it useful?
I think the concept of AI has basically remained the same for several thousand years. I’ve thrown out the holy pursuit of AI with other religious proclamations.

>>What do you think of the proposal that we will grow, rather than design, artificial intelligence?
Whose proposal is this?

(It was the late Douglas Adams I first heard this from, during an engaging and funny public talk in Newcastle, Australia a few years ago ).

>>Much writing about AI gives me a kind of ’emperor has no clothes’ feeling. Does the building ( or growing) of an AI system that can fool a human / pass the Turing test, while fun and impressive, necessarily mean we have created intent / sentience / consciousness?

I won’t really get into the Turing Test, but in my opinion, a written on-screen conversation is only a minuscule portion of bandwidth compared to the full range of human experience. Any supercomputer in any era would very quickly fail the Turing Test if you only followed the terminal’s cables back to reveal a supercomputer mainframe (or, perhaps, a hot-rodded C=64). In other words, the Turing Test as it’s currently understood, only plays the game of intelligence with conversation on a computer screen, and not in the full bandwidth of human life, vision and sense perception.

Or, put differently by Rodney Brooks, humans spent millions and millions of years just figuring out to locomote. Only a few thousand years have been spent on figuring out language. So, maybe the Turing Test has it all wrong and is skipping over the harder “common sense” problem: how to walk. In other words, maybe a better test of intelligence is to stick the supercomputer mainframe on one side of a freeway and get it to run across in heavy traffic without getting hit.

>>Wearing your Dorkbot hat (“People doing strange things with electricity” ), what projects / developments point out interesting ways forward with energy efficiency and the mammoth task of reducing our energy footprint in the 21st C?

There haven’t really been a lot of demos on this topic, although Tom Jennings (inventor of FidoNet and first webmaster for Wired Magazine, among many other incredible feats) presented on converting his car to run on alternative fuels. 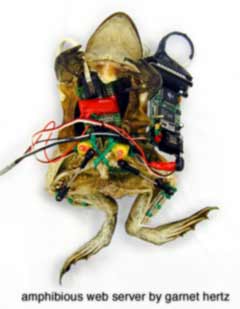 >>And your Re-Animator hat – how complex a dead creature would you be prepared to insert a webserver inside, for limb-animating website visitors?

I think I’m sort of done with the Damien Hirst line of work.

>>What sort of hopes do you have for the evolution of your (Giant Madagascan Hissing) “Cockroach Controlled Mobile Robot”?

The main concept in this project is to see if I could get a robot to be somewhat intelligently controlled by a cockroach. In other words, take a mobile robot and basically replace the CPU with an insect. To get this to work “properly” isn’t a very easy task: biological “meat” is hard to predict. I ended up making a robot that is quite temperamental and non-functional, sort of like a lot of grad students I know. 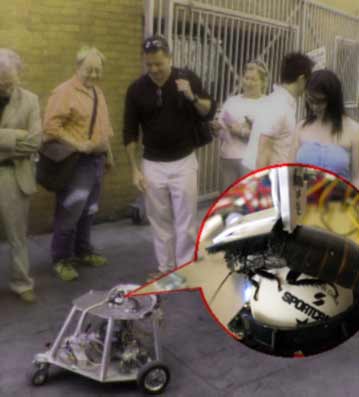 >>What did you glean from the Australian Symbiotica workshop?

I think it’s a good idea to have hands-on experience with something before forming a firm opinion on it. In the case of genetic and tissue engineering, this workshop was a way that I could see part of what all the fuss was about. In many ways, it’s a lot less glamorous than I had initially expected.

>>Which ballpark concerns about biotechnology and genetic engineering, are legitimate and misplaced?

That’s a tough one, and it’s something that I honestly don’t spend a mountain of time thinking about. However, it’s interesting to note that many American consumers don’t seem to be overly concerned about GMO produce in comparison to EU folk. Maybe the American fast (and pre-prepared) food industry paved a path for consumers to be generally more accepting of food being highly processed… I’m not sure.

>>What technologies that mimic biology ( Biomimetic systems ) interest you at the moment?
None, really.

>>What do swarms of insects have to teach us?
Time to load up on bug repellent.

>>And finally, what fuel will our future robot-driving cock-roach overlords be using?
Charred human flesh left over after we’ve all killed each other.

( sidenote by jp: Roach-o-calypse believers, should check out the great Patrick Farley web-comics Spiders, which has an army of robotic spiders in Iraq, doing surveillance work, remote controlled by arm-chair web-surfers back in the States. Tangent, but killer comic. For present-day mind-boggling, Garnet’s site is well worth a browse. )