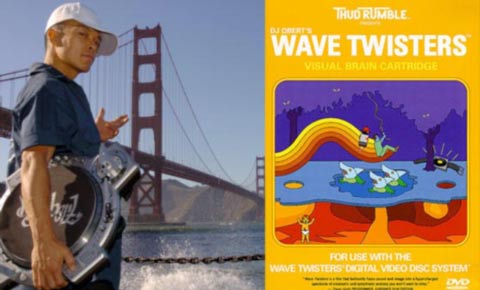 If you’ve long understood the threats from outer space posed to the four elements of hip-hop, then you’re probably well cosy with Q-Bert’s epic intergalactic scratch odyssey Wave Twisters, dreamt from the start as a feature film and finally animated sometime after his album hit the streets.

Me, I’d love to ask Q-Bert about how that whole concept developed and how the plot and musicmaking bounced off each other, what future instalments might be planned, and why American hip-hop is so far behind Aussie hip-hop – I mean they haven’t even recognised skateboarding as the 5th element over there yet. The Wave Twisters movie promoters implied I could interview the animators (who did a great job, as you can sneak at www.wavetwisters-themovie.com) and hence the visual-heavy questions below.

Turns out of course that Q-Bert himself replied ( aye carumbah! ) so all I can suggest is tune into www.djqbert.com if you wanna find out when the scratch master is gonna add phat ollies, grinds and flips to his repertoire.

What sort of processes did u go through to conceive the overall look of the film?
the animators (syd garon and eric henry) met with the artist (dug cunningham) and just messed with his work over one of the songs called “sneak attack,”then from there they said they had something and began to make the whole film in that theme.

Were you happy with the software used?
Of course! I can’t live without pro tools as it’s the music industry’s standard. The animators also say that Adobe’s After Effects was all they needed.

What (imaginary) software would u like to make a sequel with?
The same stuff for me. I don’t know what the animators think though, but I believe they would still use it. Maybe that hardcore expensive cgi stuff for another film!

What would u do differently if making Wave twisters again?
Well, as a musician, definitely a progression in the emotional quality of the music to where different feelings for different scenes can be achieved.

How well do u think the animations and effects have dated?
It still looks great to me. as for what it is, it’s totally supposed to look like that in it’s classic sort of way.

Do any of the Wave Twisters team play with real-time visualization of music?
Not sure, but those guys can do anything.

What further animations have you been involved with?
Nothing but the sequel, and a video game called “frequency” for playstation if that counts.

When does the Wavetwisters computer game come out?
That’s what we’re looking to find out actually

The top 3 albums you|d love to make into films?
mix master mike’s “anti theft device,” d-styles’ “phantazmagorea” and of course my next album whatever that will be called!

PS. I did send a buncha other Qs straight back when I realized who was answering, and if they ever fly back, will tag them here later…. ( 2008 notes – haven’t arrived yet… )