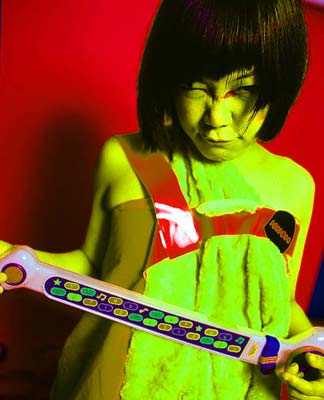 Thu Sep 29 kicks the festival off in style with Dj Wasabi ( in very fine turntable mutation form of late, and returnign to native Newcastle from Melb), Keir, Wake Up and Listen ( ripped a fine set at recent Liquid Architecture), lieutenant colonel spastic howitzer, Ele-mental, re cursor, 8 ball, mute-till-late(Bris) , SuckaPish P Jonez ( Brisbane’s noisiest self-producing MC ) & Noise Machine. And probably the sound of ginger beer kegs being emptied every 10 minutes or so, if it can be heard under the chatter of hundreds of interstate relationships being renewed. @ Ze Festival Club – 6pm – 2pm Free

Other Festival Bits
There are of course huge amounts of Panels, Workshops, gallery exhibits ( eg Otakuculture ) for frying the collective brains, and stacks of other Electrofringe highlights – including an appearance from Mark Amerika (US). And there are also 5 other festivals happening! www.thisisnot.art.org details the programs for Sound Summit – the Independent electronic music label gathering, EAR the Environment Awareness Raising festival, Strike – a national aerosol and visual artist project ( 40m x 7m), the National Student Media conference, and the National Young Writer’s Festival. While there, read about the temporary radio station being created for the event, the new camping facilities in place this year ( book now via the web to join the tent-city madness ), and a host of other simultaneous events, installations, jam-spaces and happenings. Woot~!